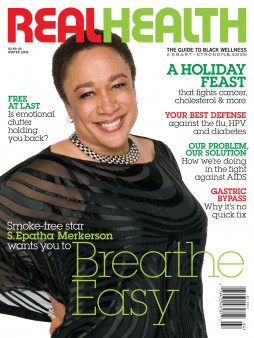 For Emmy-winning actress S. Epatha Merkerson, the accomplishment she’s proudest of is a smoke-free life.

You may know her as the unflappable Lt. Anita Van Buren on TV’s longest-running crime drama, Law & Order. You may also know her as the benevolent Nanny on HBO’s small-screen gem Lackawanna Blues. But as proud as S. Epatha Merkerson is of winning a slew of awards for these and other roles throughout her 20-year career—and for playing the longest-running black character in an American TV drama—the achievement she is most proud of is becoming smoke-free.

“I stopped smoking on February 5, 1994,” recalls the Saginaw, Michigan, native, who quit overnight after 23 years of smoking. “I woke up that morning, and it felt like an elephant was sitting on my chest. I could not take a breath. And I just remember lying there, looking at my pack of cigarettes on the nightstand and thinking that the great thing about life is that you always have the opportunity to make another choice—so I did.”

Merkerson’s epiphany came not a moment too soon. Just a few years later, she watched both of her best friends die of lung cancer.

“Yvette Hawkins and Billie Neal,” she says, remembering her fallen friends, who were fellow actresses. “One of them passed away in 1995; the other in ’97. I was actually there when Yvette took her last breath. We found out she had cancer on March 20th, and by April 10th, she was dead. We found out Billie had cancer in June, and she was dead by December. It is an awful, awful way to die.”

And as if that weren’t hard enough, a few years later, Merkerson’s sister, also a smoker, was diagnosed with the disease.“My sister Debbie had a cough, so she went to the doctor thinking it was bronchitis,” explains the actress who has won Emmy, Screen Actors Guild and Golden Globe awards. “It turned out to be lung cancer.”
Smoke Signals
Merkerson’s sister probably hadn’t seen the warning signs because lung cancer—the leading cancer killer among men and women—is, in many ways, undetectable. Most of its symptoms, including chronic cough, hoarseness, shortness of breath and loss of appetite, could be applied to any number of ailments. And just being a woman made Debbie more prone to developing the disease. While the rate of lung cancer is dropping among black and white men in the U.S., it is skyrocketing among black and white women. Even so, race stills plays a significant part. A study published in the New England Journal of Medicine early this year showed that African Americans are more susceptible to lung cancer from cigarette smoking than are whites, Japanese Americans and Latinos.

Fortunately, the doctors discovered Debbie’s disease in time to save her. After a series of excruciating surgeries, she is now cancer-free. But for Merkerson, the message resonated loud and clear: Stop smoking or die. “It could just as easily have been me,” she says.

Now Merkerson is a spokesperson for such organizations as CancerCare, the American Lung Association and Campaign for Tobacco-Free Kids and is helping other people get the message.

“S. Epatha Merkerson is a remarkable person who just happens to have been a smoker,” says Jeanie M. Barnett, CancerCare’s director of outreach and marketing. “She’s very passionate about speaking out on this issue, and she’s compassionate because of her own personal experiences.”

Despite her convictions, the actress acknowledges how difficult it is to kick the habit. She suffered a series of humbling setbacks before she quit for good.

“It is the most difficult thing I have ever done,” admits Merkerson, who says she tried SmokEnders and other programs over the years. “I tried to quit maybe three or four times. I remember throwing cigarettes out only to go rummaging through the trash for them later. I would do anything to get that nicotine fix.”

Leaning on the support of her actor friends gave Merkerson the confidence she needed to stay on track.

“I quit smoking just as I was starting to film [Law & Order] in June of ’93,” she said. “I remember having conversations with [costar] Jerry Orbach about how difficult it was. (Orbach died of prostate cancer in 2004.)

“He encouraged me to stay at it. Sometimes he’d see me fiending, and he’d say, ‘Here you go, kid. Drink this bottle of water. It’ll help.’ He understood what I was going through because he’d quit smoking too.”

Fighting Mixed Messages
The difficulty people have quitting is why Merkerson is such a staunch advocate of education programs geared at preventing young people from becoming addicted to cigarettes in the first place.

“Right now, these kids don’t stand a chance,” Merkerson says, referring to the ads around her home in Harlem, New York. “There are all these billboards promoting drinking and smoking, specifically in poor, black communities. It’s not right. Just like we have sex education in schools, we should show people the dangers of smoking at an early age. Show kids pictures of a diseased aorta that has been damaged by years of smoking. It’s gross, but it just might be effective.”

Merkerson says the double messages from the government, which labels cigarettes as hazardous yet supports the industry that produces them, are confusing to young people. And then there are the finger pointers who blame smokers for finding themselves in her predicament in the first place.

“Lung cancer [causes more deaths than] colon, breast and prostate cancer combined,” Merkerson explains, “but because [we smoked and] it’s ‘our fault,’ there isn’t enough research being done. Tobacco is big business, and a lot of people in our Congress get [tobacco] money for their campaigns, so it’s not going away. Since we can’t stop it, we need to start pushing Congress to at least [provide] the funds so that doctors can research
early detection.”

The stigma associated with lung cancer can even interfere with the treatment that patients receive says Win Boerckel, a licensed, clinical social worker and program coordinator at CancerCare.

“I think it’s a very overt message, in terms of what I hear from my patients and clients,” says Boerckel. “I know of doctors who have pretty much said, ‘Why should I waste my valuable time treating people who brought this upon themselves?’ This is why people don’t contribute to lung cancer research as much as they do to prostate and breast cancer. They don’t come out to the events. One woman said, ‘When I had breast cancer, they’d throw me a parade. When I had lung cancer, they’d walk to the other side of the street.’ ”

That’s one reason why Merkerson is focusing on early prevention. She wants to get the message to young people that the decision to smoke could mean the difference between life and death.

“When I see kids on the street smoking, I just walk up to them and say, ‘I lost my best friends to cancer. I see you smoking, and I think, I wonder what [his] best friend thinks about this? They usually look at me like I’m crazy, but I think they understand what I’m saying.”

Clearing the Air
Merkerson’s advocacy extends even to her craft. Recently, she nearly turned down a role because it required her character to smoke.“[Actor and director] Anthony Hopkins wanted my character to smoke,” Merkerson says of her part in the upcoming film Slipstream, which is scheduled to debut at the Sundance Film Festival in January along with her other new film, Black Snake Moan, with Samuel L. Jackson. “Well, I called my manager after I read the script, and I said I’m not going to smoke. If some little black kid happens to pick up a cigarette because they’ve seen me in some movie puffing, then I’m just a liar, so I had to make that decision. In the end, they gave me the part—and I didn’t have to smoke.”

And if you’re a friend or family member of the recently divorced actress, you know you’re not immune to one of her infamous speeches on smoking.

Still, Merkerson says she’s careful not to alienate people with her approach. “If you’re not ready to quit smoking, it’s not going to happen,” she explains. “The constant badgering of someone is useless. It’ll just make them want to smoke more. I have brothers who still smoke, and I talk to them about it because I love them, but I don’t pressure them.”

Instead, she uses her story to entice them with promises of a happier, healthier life. Merkerson says her physical transformation began soon after she took her last drag on a cigarette.

“When I stopped smoking, I could breathe better,” she says. “I could walk 20 or 30 blocks and not be sweaty and panting. Onstage, I could sing without feeling out of breath. I started hitting notes I could never
hit before.”

Not all of her body’s changes were as welcome. Merkerson says she put on 40 pounds after she quit smoking.

“That’s a part of nicotine,” she says. “It’s like speed. So I understand now why when people quit, they’d get back to smoking. But it’s a stupid reason,” she insists. “I watched my ass grow on national television, so if I can do it, others can too,” she says.

Merkerson also battles a couple of other significant health concerns. A few years ago, she was diagnosed with Type-2 diabetes, more than likely brought on by her sweet tooth. But to counteract destructive eating habits, the TV star vows to dust off her bike and go for a ride real soon. And because she’s got a history of gum disease—which can be brought on and exacerbated by smoking—she sees her dentist every three months.

Because of her vigilance, S. Epatha Merkerson’s health problems are diminishing. She plans to live a long life—and her odds are better now that she’s no longer smoking.