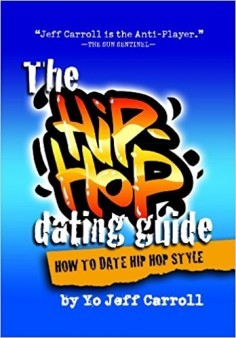 This book is MUST READ and is the product of more than 25 years of research and firsthand experiences. Like most people, Yo Jeff has been speaking on male and female relations since he was in high school. This book presents solutions to some of the most irritating problems.

“I am an average, American guy and I say that without apology. Everyone isn’t a millionaire or an alpha male like Steve Harvey. People’s characteristics are varied and dating advice should follow suit,” Yo Jeff. Growing up, he had challenges dating which resulted in not going to his high school prom. He solved his problems, however, and is now married to a prom queen. He used dating to find her. He considers himself a success and wants the same for everyone.

The Hip Hop Dating Guide follows his breadcrumb trail to the happily ever after. It covers how to meet people and how to maximize your dating process. It teaches you how to be a good dater. It shows you how to deal with the “dating predators” who seek to break hearts and spread disease. You will learn how to maximize your personal dating process and get the most from your dating experience. Hip Hop is a great American creation; you will see just how great it is by learning its style of dating.
Since it began in 1972 in the Bronx, Hip Hop has changed the way Americans dance, talk, eat, drink, dress, and vacation. Its trends cut across racial, economic, and cultural lines. Hip Hop has the power to influence people to walk around with their sneakers untied and wear their pants below their butts. It also has the power to end conflicts and help elect a black president. The Hip Hop Association in New York uses it to educate young people in classrooms and in Philly, the Start Snitching Campaign is using it to fight gun violence. Now, Yo Jeff is using it to help people date, avoid disease, avoid drama, and find the happiness of marriage.

Yo Jeff Carroll is an author, filmmaker and Hip Hop 1st Dating coach. Yo Jeff uses healthy dating ideas and combines them with the fun and lively subculture of Hip Hop to show people how to address STDs, and Drama. He lives with his wife and son in South Florida. He is a contributor to Real Health magazine. Yo Jeff has written for Swerv magazine America’s leader in Black LGBT health issues as well as College magazines and newspapers nationwide. He wrote and produced the award-winning movie Gold Digger Killer and in 2005 his Hip Hop Dating Codes were endorsed by Hip Hop Culturalist KRS-ONE. His workshop Stop the GAME is enjoyed by college students and people everywhere. He has been a guest on NBC 6 Miami, New York’s Hot 97 and Air America with respected Hip Hop intellectual Chuck D.
To view him in action goto http://www.youtube.com/watch?v=_22asKR-3-Y