The Deadly Consequences of Chauvinism 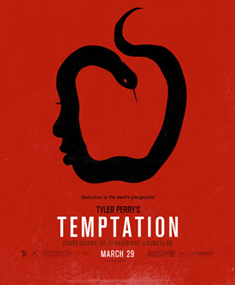 I went to see Tyler Perry’s Temptation last week, and I wish the movie had come with a disclaimer. You know, just a little preview preparing me for the unexpected time traveling that would place me in a period when the actions and behaviors of women are considered sinful and egregious. A time when sex was used as a mechanism to control women and create invisible boundaries as to what women can and cannot do. That would have been nice.

Now, I know how important religious messages are to Tyler Perry. The redemptive nature of religion is a theme heavily imbedded throughout many of his plays and films. And as a spiritual person myself, I can relate to some of his.

However, I have never been a fan of using religion to wage wars or legitimize oppression. Similarly, I have never approved of using it as a means of vilifying women or those who are living with HIV/AIDS. And unfortunately for Perry, this is exactly what Temptation does. It appears as if women just can’t get past the legacy of Eve’s acceptance of the forbidden fruit. And HIV/AIDS is a disease given to those who partake in sinful behavior and thus are deserving of the virus.

For Perry, the consequences only manifest in the main character Judith, as is noted with the exaggerated distortion of her figure, the loss of her marriage, and her apparent alienation from the community at the end of the film. Let me just point out that the man, Harley, who gave Judith the virus was vibrant during the entire movie and was definitely not ostracized from the community. Thus, suggesting that HIV/AIDS only impacts women who are unfaithful and leaves men virtually unscathed.

Seriously? This is simple and dangerously superficial. It is a misrepresentation of women and those living with HIV/AIDS. It resurrects dated notions about the roles of women and criminalizes those who are HIV positive. Rather than a source of entertainment, Temptation is nothing but a scare tactic supported by chauvinistic beliefs in order to “control” women.

I just want to remind Perry that we are living in 2013 and that it is OK to acknowledge that things have changed. Let’s just hope he remembers that the next time he sits down to make a film.