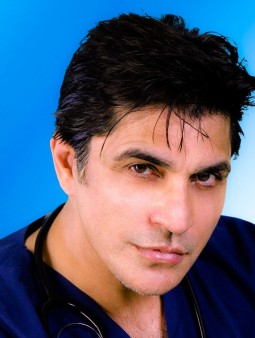 According to the Washington Post, tonight’s debate between presidential candidates Hillary Clinton and Donald Trump—the first of three scheduled verbal showdowns—“is likely to have a full agenda.” Will the candidates’ state of health be one of many other pressing issues voters want addressed?

Well, maybe yes and maybe no as everything and anything might happen when these two take centerstage in debates that might “be bigger than the Super Bowl,” said one political consultant. Be that as it may, since we’re in the business of wellness, Real Health spoke with Pawan Grover, MD, an interventional specialist in Houston with more than 25 years of experience as a private physician, about the health of these presidential candidates, if there’s reason for concern about this and, in general, just to give readers a better sense of the medical issues concerning these nominees for commander-in-chief of this country.

How healthy are the candidates?

We live in interesting times. Everything is politicized. Everything. With our multimedia 24/7 news outlets and social media, every misstep is magnified through constant video loops.

There is lot of distortion and noise. It can be confusing to sort through and understand.

First of all, in terms of presidential health, some will argue that it doesn’t really matter since a lot of people are not worried about their own health. That is true, and the answer to that question is very complex and it has less to do with awareness of health concerns because generally doctors and health care practitioners make the worst patients. I do believe, however, given the nature and responsibility of the President of the United States, we are concerned about how healthy the candidates are.

In terms of the historical context, candidates have generally been less than open about their health issues. This is in part because they don’t want to give their opposition and critics ammunition.

The health information that is released is minimal and written in a way to present them in the most favorable light. Paradoxically, this opens the gate for intense second-guessing and wild speculation.

As a doctor, making a diagnosis requires physical examination, knowing all the medical facts and seeing patterns. That said, it’s disconcerting to see doctors making diagnosis of the health of the candidates based on limited information. For example, video of abnormal eye movements by one of the candidates in one or two speeches is touted by some doctors as evidence that the patient has neurological damage.

In terms of our own health and our families, this becomes important because a single blood pressure reading is not as diagnostic as tracking the pattern of blood pressure changes over a longer period of time. Therefore, it becomes essential to self-monitor your blood pressure over a few weeks and report that to on your visit. This gives the doctor vital information that could make a significant difference.

One could also argue that the perception of the health of the president has an powerful effect on the world stage. So that they are motivated to downplay health issues. Vladimir Putin posing topless on a horse and engaging in feats of physical prowess is no accident. He projects strength and it is effective.

In my opinion, a person’s ability to handle stress is the single most important quality to determine their fitness for the presidential office. How we are feeling physically does affect our mental state, in particular our energy levels. We can all relate to this in our own lives. When we are under the weather, all we want to do is get through the day. Our ability to handle conflict stress and decision-making is diminished.

Was dehydration really the cause of Mrs. Clinton’s fainting spell, and if so, should she have been taken to the hospital? Also, should there be concern over medications that the candidates take?

The health of the presidential candidates became a prominent topic after video emerged of Hillary Clinton passing out while getting into the van on the 9/11 ceremony.

There are multiple reasons a person can pass out, it could be issues related to the heart, possible stroke and dehydration. In addition, a person on Coumadin has added risk.

Coumadin is a blood thinner. This medication is used to decrease the formation of clots. Because of that, there is a risk that all patients carry on this medication , such as, a person could hemorrhage or bleed through a stomach ulcer, this would drop the blood pressure and could pass out. Trauma to the head can cause bleeding in the space between the skull and the membrane covering the brain and because it is a closed space, this can lead to a number of neurological consequences including losing consciousness.

In addition, passing out can also occur through a benign vaso-vagal response. This can occur when the part of your nervous system malfunctions causing the heart rate to slow and the blood vessels to dilate, usually in response to some trigger like seeing blood. But, generally, this isn’t serious.

Still, given all of this, it’s reasonable to question why protocol was apparently broken when Mrs. Clinton was not taken to the hospital but to her daughter’s private residence.

In a situation like this when a patient passes out, it’s difficult to make an accurate assessment without access to medical testing. In my humble opinion, what makes the most sense, is that given the vulnerability of taking a presidential candidate to the hospital with possible leaks to the media and the logistics of security, is that both of the presidential candidates would have mobile medical units readily available to them. Why would they not?

For our own health, keeping hydrated is essential. When we are born, we are 90 percent water. As we age this can decrease to 40 percent. When the body isn’t hydrated, this thickens the blood and makes it harder for the heart to pump, and because red blood cells deliver oxygen, this decreased flow can lead to less oxygen flow to the tissues.

So how do we figure out how much to drink daily? Some sources say drink 8 to 12 glasses of water; some say toss back a gallon. But the answer is more complicated then that. So many issues can affect hydration, including sweating and medications. This means that a simple formula isn’t accurate. The best way to determine if we are getting enough water is to look at our urine color. If our urine is light yellow to clear, we are hydrating adequately.

What issues could arise from Mrs. Clinton’s concussion?

Given the limited medical information presented in regard to the concussion suffered by Hillary Clinton, it’s difficult to make an assessment of issues that could occur. In general, a concussion is an injury to your brain that can impact how it functions.

Depending upon the level of injury, a concussion could be mild and a patient could recover completely, or the condition can be severe and could include headaches, problems with concentration, memory, balance and coordination.

Pneumonia is infection of the lungs. Like all infections, they can be mild and patients can recover quickly. Or the illness could be a severe infection requiring hospitalization. Older adults, babies and patients with compromised immunity are more vulnerable. Symptoms could include a cough, fever, shortness of breath, chest pain or being tired or very weak.

It is important to be vigilant when we’re taking care of our older family members because sometimes, confusion and delirium could be the first signs of pneumonia.

Dr. Pawan Grover is a graduate of the UMDNJ-Robert Wood Johnson Medical School (Rutgers Medical School). He completed his residency at the Texas Medical Center, and did a special fellowship in Sydney, Australia with professor Michael Cousins who is considered the father of regional blockade and pain management for cancer and non-cancer pain. He has worked extensively with top neurosurgeons from MD Anderson Hospital in the Texas Medical center for cancer pain management. He had done extensive work as a medical correspondent for news networks in topics that have included cancer and their prevention.