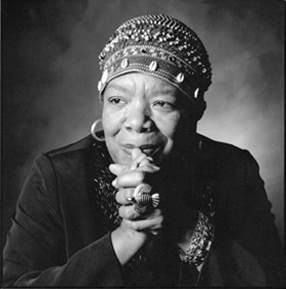 Heroes come in many shapes and sizes. Many people speak about their personal hero and describe a time when that special person changed their life. Most individuals know their Hero personally. Some do not. It is an amazing gift when you are able to touch someone’s life that you have never even met. That’s exactly what the legendary Maya Angelou did for me at the tender age of 12 years old. While I am saddened by her recent passing, I am in awe of the glorious legacy that she left the world to be passed on for generations.

I’ve had a love of reading since as early as I can recall. There have been many poets and authors who have touched my soul, but none like Maya Angelou. (We’re friends in my head.) I can vividly remember how I first got familiar with her body of work. The movie Poetic Justice was about to hit theaters in two months time and there was a behind-the-scenes special on the TV. I was a huge Tupac and John Singleton fan so I tuned in.

That day changed my life. John Singleton was so ecstatic that somebody named Maya Angelou would be acting in the movie as well as writing all the poetry featured in the film. Being the curious cat that I am I researched her name and came upon her book I Know Why the Caged Bird Sings.

From the moment I began to read the story about Maya Angelou’s early years in this thing called life I was totally engaged. If you have never read that book, get it now!

After I finished reading her life story about tragedy and triumph I couldn’t wait to find out more about her. I enjoyed other books and poetry that she had published over the years such as “Just give me a cool drink ’fore I die” and “Wouldn’t take nothing for my journey now.”

When I read these poems, I felt that she was speaking directly to me. I couldn’t wait to see the film to hear more of her elegant words and to see her in her acting role. Once the movie was released I had to see it, and I had to see it opening night. Not for Tupac, not because I loved Boyz In the Hood, John Singleton’s first film, but because I just had to see this woman grace the screen. My older sister Tanya took me along with some friends to see the highly anticipated film and I enjoyed the “ghetto love” story (even though now that I have kids I show them the edited version).

I especially enjoyed Ms. Angelou’s poetry read throughout the movie by Janet Jackson’s character Justice. Instead of Maya Angelou reading her poetry for the film, she opted to play the character of Aunt June.

In the film, Aunt June was an elder who dropped some serious knowledge to the young’uns on how to act correctly and some tidbits about true love. Maya Angelou was virtually playing herself. She was golden and from that day forward she was my hero.

From that day forward, my 12-year-old mind started to process all of the knowledge she had dropped on me through her extensive resume and I seized any opportunity to hear her speak.

To this day I can listen to Maya Angelou for hours knowing that there was a time when she couldn’t speak. Her life story is a true testament to me that, with God, faith and belief in yourself, you can truly accomplish anything.

Maya Angelou held many titles and wore many hats throughout her life including author, poet, singer, actress, dancer, activist, but I believe her best gift was the ability to speak to the human soul. She spoke to mine for sure. She even spoke to Tupac Shakur’s soul.

The story goes that while filming Poetic Justice he and someone else were on the verge of fighting. She approach him in the heat of the moment, he was cursing and carrying on. She had the nerve to interrupt him. She asked him a couple of times could she speak with him but he just kept on cursing and yelling. So she turned to him and spoke to his soul. She asked him, When was the last time anyone told you how important you are? Did you know our people stood on auction blocks, and were made to lay in their own waste. They were bought and sold so that you could stay alive today! (I’m paraphrasing.)

The legend has said that after she spoke those words, Tupac stopped his rant and began to weep to her. That’s the effect Maya Angelou had and will continue to have on people for years to come. During my teenage years and well into my adult life, she let me know that you can overcome great obstacles and the value of self-worth.

It’s a beautiful feeling to look in the mirror and say, “I’m a woman phenomenally, phenomenal woman, that’s me” and truly believe it.