My Pet Peeve with Going to the Vet

Twitter
Facebook
Pinterest
Tumblr
Email
Advertisement
Just after Thanksgiving, I had the worst scare. My cat, Juma--he’s a domestic shorthair-- just stopped eating. Yeah, just like that. One day he was fine, the other he was curled up with his face turned to the back of the chair. Fortunately, he was still responsive. That gave me hope.

Really, I had just taken Juma to the vet several weeks before after a long hiatus. Juma is an older cat, but he’s still active and frisky when he wants to be. Then, boom! He’s no longer interested in food; he’s listless; he’s just not himself. (That certainly wasn’t Juma!)

Anyway, this hunger strike scared me. I recognized all the signs. My cat was constipated. Every cat seems to have some condition that they’re predisposed to having. This was his. A few years ago, I had to take him to the vet for the same issue. He was given an enema and I was sent home with some new food to feed him.

Guess what? He didn’t like it, so I had to pack up those verrry expensive cans of soft food and bags of hard food and tote them downstairs into the basement. Every so often, I still see them sitting on a counter all wrapped in plastic. (Now it’s too late to even give them away.)

Anyway, when I called the vet’s office, this time I asked them to tell me exactly what needed to be done and how much each thing would cost. Vets are a panic. Whenever I’ve taken Juma in for an exam, someone comes to get him and the next time I see that person is when I’m being handed a bill for hundreds of dollars I never expected to spend.

That’s why this time, I asked questions up front. Well, the woman at the vet’s office quoted me all the prices for the exam, the blood test, the enema (if needed), the administration of fluids under the skin (if needed) and the waste removal. The total was $488.42.

Uh, excuse me! I love my pet, but where do these people come up with these figures? I mean, really! “What are my options for payment?” I asked. “Can I do a payment plan?”

“Sorry, but your only options are to pay in full or get Care Credit,” she replied. Care Credit? Was she for real. I was already in debt up to my eyeballs. Now I’m going to push myself deeper into s&(%$t? Uh, no!

So I frowned into my cell phone and said, “Okay, thanks, ma’am. I’ll have to call you back.”

Then I went in search of my laptop. Long story short, I did some research. I must have gone on at least half a dozen pet forums to find out what people used to treat their constipated cats. I noticed that pumpkin puree came up quite a bit. Some people said they’d given their cats milk for a short time. (Milk gives cats diarrhea, so it’s not really recommended you feed felines the white stuff. But in the case of a constipated cat, you want soft stool. Okay, I won’t get too graphic...)

Anyway, I also found a laxative recommended by vets that I ordered. The product is called Lax-Eze and it’s a combo of beet pulp, kelp, psyllium seed, flax seed, oven-dried chicken liver, papaya leaf, apple fiber, bentonite clay (edible, safe form) and diatomaceous earth (edible, safe form). The texture is gritty, so I was a little concerned. But since Juma was drinking lots of water still, I figured at least he would have enough moisture so this combination wouldn’t just cake up inside him.

So I started Juma off on a mix of warm pumpkin puree and a little milk mixed together and mixed into his soft food--just to get his system going. Don’t forget, he was having problems going. After two days on this mixture, he finally went to the bathroom. My family celebrated.

Next came the Lax-Eze. I mixed in a teaspoon of it into Juma’s food along with a tablespoon of pumpkin puree, and a teaspoon of slippery elm powder that I’ve always given him. (I stopped the milk after he went the first time.)

The good news is, now Juma is fine. He’s regular all the way around. I’m so glad I did that research. And, yes, I realize that Juma might have needed to go to the vet. But many times this isn’t the answer, or even the best solution, to a pet’s problem.

If you know your pet’s habits and really watch them carefully, sometimes you can make a better decision to solve common, minor health issues that don’t necessarily require a trip to the vet.

Yeah, Juma’s back to his regular self now! 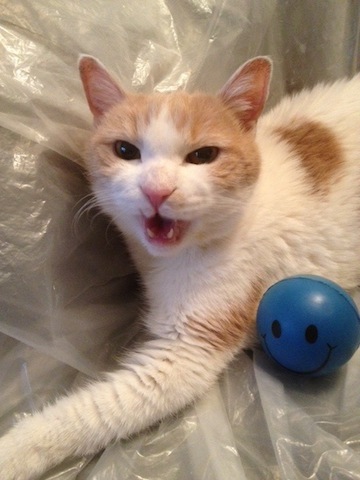