Twitter
Facebook
Pinterest
Tumblr
Email
Advertisement
I’d like to use this blog to take a break from my regular tips and share a bit of commentary. This past weekend seemed to be dominated by the theme of condoms for me. It started when my girl publicist Yvette Harris asked me to be on the male panel for Miami DJ Supa Cindy’s “I Know I Can” young women’s summit on Saturday morning. The summit was hot and Cindy is the bomb host. She touched on just about every issue with regards to young girls. I only took issue with one thing, which, was they only focused on physical bullying and not verbal bullying. But physical Bullying is what everyone is talking about so I’m cool. My first piece for Real Health was about my verbal bullying experience. Click here to check it out.

The summit had a lot of people I knew like Lady Queen, a 24 year old who was born with HIV/AIDS, and Hip Hop rapper DJ Moni Love. The male panel had Miami DJ Loernzo Ice T Thomas, Football player Sinorice Moss Eagles receiver, Jawan Stradeer CBS reporter and others. The audience was all teenage girls and a few parents. Each panel was about two hours long which was enough time for every question the girls had to be answered. Their were two questions asked of the male panel that stood out to me. One question was about Love and how do you know when someone loves you. I plan to blog about this question in the future. The other question was about sex and abstinence. When the various panel members answered the question the subject of condoms came up. So as not to repeat what another panelist said I decided to build on the condom point.

In my answer I said that using condoms are no longer the romantic obstacle they used to be. When I was in college back in the 80s I called myself Condom Man. Not to be confused with the Trojan Man. In college I volunteered with the health department on campus to give out condoms. One of the reasons why I gave out condoms was so I could get free condoms. Now-a-days health departments give out free condoms but that’s beside the point. Anyway, while in college I got so accustomed to using them I never had sex without one. I don’t care if the girl told me she was on the pill. I still used one to protect myself from disease. I remember a few times girls told me that they wanted me to go raw and not use a condom. When I asked them why they said “because it felt better”. That was the biggest excuse not to use condoms used back in the day. Now the condom companies have fought back with sex enhancing condoms. Trojan condoms is one company who has these new type of condoms. They have a magnum condom called Fire and Ice. This condom claims to make sex better than raw. What! That’s right better. So, I told the girls that there is no way they should let a boy talk them out of using a condom.

Later that night I when to a promotion for Trojan’s Fire & Ice condom. Trojan condoms sponsored a national rap battle called the Bring It Back Tour. According to their website the BringItBackTour ’is a passion-driven collaborative tour that utilizes local business and community resources to engage artistic expression. We are designed to pull together prime circles of artisans, musicians, educators, and activists for the cause of inspiring our youth and peers with a multitude of positive creative outlets. The name “Bring It Back” is much more than a touring title and slogan; it’s what any movement represents. We bring fans of the hip hop community back to a grassroots connection with its ’fourfather elements’-- Breakdancing, Graffiti, Turntablism, and Emceeing--with the addition of live reggae, rock n’roll, visual arts, and charity work.

The best thing about this tour was they gave out free Fire & Ice condoms to everyone. The show was good as well. One of the producers of the show Rahman Jamaal opened the show with a freestyle rap performance. The whole evening was Hip Hop and I was right at home. I brought three of my nieces who are all high school age and they enjoyed the old school hip hop elements as well. The tour is scheduled to go to more cities so if you are interested in going to a free hip hop party or you just want some free condoms then log on to their website.

The last thing I would like to mention on the subject of condoms was a report written about in Real Health Magazine. In an article titled “African Americans are Wrappers” it shared the results of a new study on sex by Indiana University. According to the study, African Americans are more likely than any other ethnic group to use condoms. The rate among Black teenagers is as high as 90 percent when asked if they used a condom the last time they engaged in vaginal sex. This was something I just had to relay. We hear so much negative news about Black people and STD and teenage pregnancy I wanted to offer some encouraging news. Now it makes perfect condom sense to me why Trojan would sponsor a Hip Hop tour.

Thanks and hit me back at coachyojeff@gmail.com with your comments. 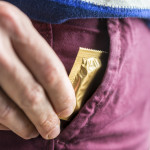