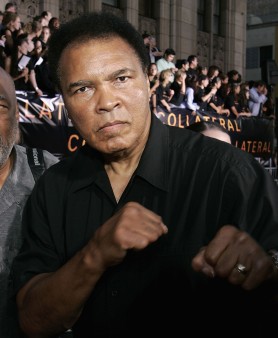 Goodbye to a Champion

When I heard the news that Muhammad Ali had died, I told my sister, “This is the end of an era.” The cliché seemed like a lame comment to make about a man, nicknamed “the Champ,” who was so large. But I felt that somehow it was fitting. I grew up watching Ali move through the years celebrated as an admired and skilled athlete and for his showmanship in sports and later lauded in the United States and internationally for his activism, humor, charisma and courage while battling Parkinson’s disease, an incurable illness.

A handsome man, Ali was featured in a coffee table book titled Black Beauty: A History and a Celebration, by Ben Arogundade. Appropriately enough, Ali was showcased in the middle of the book, shown in an arresting black-and-white photo that was mesmerizing enough to stop your fingers from turning the page while you stared at the face of this man in all his youth and beauty.

In 1984, when Ali was diagnosed with Parkinson’s disease at age 42, he’d already begun showing symptoms of this neurological disease shortly after his retirement from boxing in 1981. Three years after he retired, the telltale symptoms of the illness began to show. His speech was slurred, and he’d developed tremors and slowing of his body movements. These signs of the illness were in sharp contrast to Ali’s famous description of how he’d “float like a butterfly and sting like a bee” to best his opponents.

Despite the obvious spirit that was often still on display in Ali’s lively gaze, the Champ’s body suffered under the onslaught of Parkinson’s progressive battering. Eventually, Ali was unable to speak in public, and his efforts to move became increasingly difficult. The slowness of movement Parkinson’s disease causes is called bradykinesia. This symptom is often accompanied by stiffening of the body’s limbs and trunk and impaired balance and coordination.

Ali was famous for his beautiful body that was likened to a piece of sculpture by famous artist Leroy Neiman, who said he had no “flaw or imperfection. His features and limbs were perfectly proportioned.” This picture is of Ali as he was back in the day and one that many people who, like me, grew up watching him dance around the ring, will always remember.

Interestingly, Ali was very public about Parkinson’s disease. He established the Muhammad Ali Parkinson Center in 1997, along with other philanthropists, and dedicated his life to raising funds to support research, treatment and care for those with the illness.

After doing research to write this post, I remain in awe of the Champ. Ali’s reputation as a humanitarian is so amazing to me and I learned so much about his work in the United States and all over the world. Yeah, without a doubt he was the Champ. But he was also known as one of “the Greatest” human beings of our time.

Ali will be missed, but not only by those who knew him. He’ll also be remembered by many others like me, who never even met him.

Looking to learn more about Parkinson’s Disease? Check out this Basics page.