What is thyroid disease?

Hyperthyroidism is caused by an overactive thyroid gland that produces too much of the hormone thyroxine. This type of thyroid disease can increase the body’s metabolism, leading to unintentional weight loss and a rapid or irregular heartbeat.

Hyperthyroidism is commonly caused by the autoimmune disorder Graves’ disease, also known as toxic diffuse goiter. Graves’ disease causes the immune system to attack the thyroid, causing it to become overactive and produce too much hormone.

Another, less common cause of hyperthyroidism is thyroid nodules, which are benign lumps that develop on the thyroid, resulting in excessive production of thyroid hormones. This is more common in people over 60 years old.

An increase in iodine in the body can also lead to overproduction of thyroid hormones. This can occur when someone is taking medication that contains iodine, such as amiodarone, which is used to control an arrhythmia, or an irregular heartbeat.

Some common symptoms of hyperthyroidism are:

Who is at risk?

How is hyperthyroidism treated?

The goal of hyperthyroidism treatment is to regulate thyroid hormone levels. To achieve this, doctors can prescribe anti-thyroid medications and radioactive iodine to slow the production of thyroid hormones. Typically, these medicines must be used for one to two months for symptoms to improve.

Beta-blockers are also commonly used to slow one’s heart rate, reduce tremors and alleviate anxiety. These can be used simultaneously with other forms of treatment. Once thyroid levels return to normal, people can stop taking beta-blockers.

Treatment less commonly involves the surgical removal of part or most of the thyroid gland to restore hormone levels to normal. If the entire thyroid gland is removed, patients must commit to taking lifelong hormone replacement medication for the body to function normally.

Hypothyroidism is caused by an underactive thyroid that does not create or release enough hormones into the bloodstream. This causes the metabolism to slow, which can lead to weight gain. Extreme forms of hypothyroidism can cause low body temperature, anemia, heart failure and coma.

Primary causes are most common and typically include the autoimmune condition Hashimoto’s disease. Also known as Hashimoto’s thyroiditis or chronic lymphocytic thyroiditis, this is a hereditary genetic condition that causes the body’s immune system to attack and damage the thyroid, thus preventing it from producing and releasing enough thyroid hormone. This condition is very common in pregnant women who have hypothyroidism.

Other primary causes include:

Some common symptoms of hypothyroidism are:

Who is at risk?

Hypothyroidism most often affects middle-aged and older women over age 60. Women are more likely to develop the condition after menopause than earlier in life.

Pregnant women with hypothyroidism often develop Hashimoto’s disease, which causes fatigue, muscle cramps and sensitivity to cold temperatures. Thyroid hormones are essential to fetal development, so women must check with their doctor to regulate their thyroid levels during pregnancy.

How is hypothyroidism treated?

In general, hypothyroidism is easy to treat. Hormone replacement therapy replaces the amount of hormone your thyroid is no longer producing. This is typically achieved through oral medication. Levothyroxine is one commonly used medication. 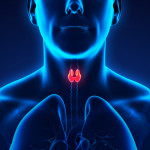