What is Ebola virus disease?

Ebola virus disease (EVD) is a rare and deadly viral disease that most commonly affects people and nonhuman primates, such as monkeys, gorillas and chimpanzees.

The illness is caused by an infection with a group of viruses within the genus Ebolavirus. The viruses were discovered in 1976 near the Ebola River in a village in the area now known as the Democratic Republic of Congo. Most cases and outbreaks of EVD occur in Africa; only four of the viruses are known to cause disease in humans: Ebola, Sudan, Taï Forest and Bundibugyo.

What are the signs and symptoms of EVD?

According to the Centers for Disease Control and Prevention (CDC), symptoms of EVD can begin to appear about to two to 21 days after exposure to the virus. (The average time is eight to 10 days.)

How is EVD diagnosed?

Because early symptoms of EVD are often similar to those seen in patients with other, more common diseases, such as malaria and typhoid fever, the illness can be difficult to diagnose initially.

For doctors to determine whether Ebola virus infection is a possible diagnosis, there must be a combination of symptoms that suggest EVD and a possible exposure to EVD within 21 days before the onset of symptoms.

A person who shows early signs of EVD or might have been exposed to EVD must be isolated from other people. Additionally, public health authorities should also be notified so blood samples from the patient can be collected and tested to confirm that the person has the virus. (The virus can be detected in blood following the emergence of symptoms.) If the test is positive, officials will begin an investigation that includes tracing all possibly exposed contacts.

How is EVD treated?

Currently, there is no approved vaccine or treatment for EVD. But scientists are working to develop drugs that stop the virus from replicating, among other therapies.

Although there is no vaccine, when used early, certain basic interventions can greatly improve a person’s chances of surviving EVD. Such remedies include:

Recuperating from EVD also depends on good supportive care and an individual’s immune system response. Those who do recover develop antibodies that can last 10 years or more. But it is unclear whether survivors of EVD are immune for life or whether they can contract another species of the virus. In addition, some folks develop long-term complications from the disease that affect their joints and vision.

Can EVD be prevented?

Although there is no Ebola virus reservoir in the United States, people who travel to regions where the disease is present should be cautious and protect themselves to prevent its spread.

To help people steer clear of the virus in areas affected by Ebola, the CDC recommends that people avoid contact with the following sources of transmission:

The experimental vaccine rVSV-ZEBOV, which scientists have found to be highly effective in protecting people from Ebola virus is expected to be approved by the Food and Drug Administration sometime in 2019. Research on another vaccine, the recombinant adenovirus type-5 Ebola vaccine, is ongoing. 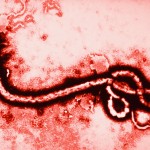