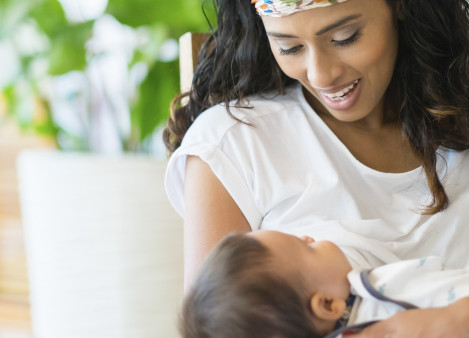 Women on HIV Treatment Are Increasingly Open About Breastfeeding

However, it’s still unclear whether Undetectable = Untransmittable extends to breastmilk.

Women in Germany are increasingly likely to talk to their clinicians about breastfeeding their infants while they are still pregnant, with a 13-fold increase over nine years, according to a retrospective national survey published in AIDS Patient Care and STDs.

The findings seem to conform with a growing call among experts and women living with HIV for greater communication between clinicians and HIV-positive women about their breastfeeding intentions. This is especially true in light of Undetectable = Untransmittable (U=U), the fact that people with a durably undetectable viral load don’t transmit HIV via sex. There aren’t enough data yet to determine whether U=U applies to breastfeeding as well. U.S. federal guidelines continue to recommend against breastfeeding by women with HIV but now urge clinicians to discuss the available data and risks and benefits of breastfeeding with their patients.

So Lila Haberl, of Goethe University Frankfurt am Main University Hospital, and colleagues at centers across Germany decided to try to find out. Between November 2018 and July 2020, they gathered medical records data from medical providers who cared for women who discussed breastfeeding their child going back to 2009. The women had received care at 20 centers across Germany, and the study gathered data about the duration of breastfeeding, maternal antiretroviral (ARV) regimen, viral load and post-exposure prophylaxis for infants.

What they found was that 42 women discussed breastfeeding with a clinician between 2009 and 2020. These women had a median age of 33, and two out of three were born abroad, with 82% of those from sub-Saharan African countries. Almost all the women, 93%, were in HIV Stage A, which amounts to good health; the rest were Stage B. None of the women had AIDS-defining illnesses or CD4 counts that would lead to an AIDS diagnosis. What’s more, the frequency of conversations about breastfeeding gained momentum over time. Only one woman talked to a clinician about breastfeeding in 2009, but 13 did so nine years later.

Most women (92%) talked about breastfeeding before delivery, and most women (58%) exclusively breastfed. One woman continued to breastfeed for 104 weeks, but this was an outlier. The median duration of breastfeeding was 20 weeks, with one woman reporting that she breastfed only one time, giving her baby colostrum.

Clinicians measured viral load in a variety of ways during breastfeeding. Close to half, 42%, were tested via HIV RNA PCR every four weeks, while 23% of the centers tested for viral load every four to eight weeks. For almost one in five cases (19%), the tests were done every 12 weeks.

Forty women had an undetectable viral load at delivery, and 35 had viral suppression during the times when they were breastfeeding (data were missing for two women at the time of delivery, and data were available for only 37 women during the breastfeeding period). Two women experienced viral rebound during breastfeeding. In one case, this happened at 12 weeks postpartum, and the woman’s viral load blipped up to 76 copies. That woman then went off ARVs. The other woman saw her viral load increase to 867 copies at four weeks postpartum—but she again had an undetectable viral load at her next doctor’s appointment. Both women reported stopping breastfeeding after finding out that their viral load rose.

There were no data available on whether any of the infants acquired HIV, but a German national survey reported no new HIV transmissions linked to breastfeeding.

“The increasing number of [women breastfeeding] reflect a growing need for normality in the context of HIV and pregnancy,” wrote Haberl and colleagues. “The diversity of the [breastfeeding] cases, especially in terms of duration, maternal [antiretroviral therapy], and breastfeeding monitoring reflects the need for a standardized procedure. Recommendations for the management of breastfeeding should urgently be implemented in national HIV pregnancy guidelines, including patient information for a shared decision-making.”

Click here to read more on HIV and pregnancy.