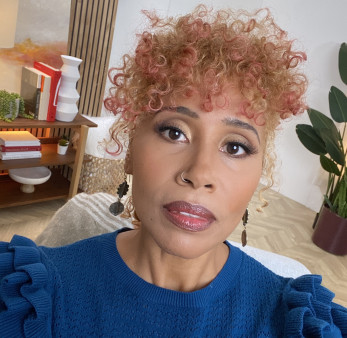 Wendi Cherry, a certified integrative health coach, refuses to allow a stubborn case of uterine fibroids to dampen her zest for life.

In a recurring fantasy, Wendi Cherry is running through a beautiful field of flowers dressed in white during her menstrual cycle. Then, something grabs her feet and pulls her down, and a voice says, “I still gotcha!”

“That’s how it feels,” says Cherry. “I’ve tried a lot of different modalities, but fibroids always stop me no matter what treatments I try.”

Cherry, age 51, has lived with uterine fibroids since 1996. The intervening years have been spent seeking relief for her symptoms. “I referred to my monthly cycle as a ‘bloodbath,’” she says. “I’d bleed through multiple pads and stain my clothing.”

Usually noncancerous, fibroids are tumors that grow inside or outside the uterus. By age 50, up to 70% of all women and about 80% of Black women will have experienced them.

Cherry realized that her profuse menstrual bleeding was abnormal at age 25 while working on a cruise ship organizing activities for children. “One day, I just doubled over,” she says. “They had to take me to a hospital in the Grand Cayman Islands where I was given a sonogram.”

Physicians told Cherry she had six fibroids and cysts in her uterus and recommended that she see her doctor as soon as she returned to the United States.

Back in the states, Cherry’s doctor prescribed birth control pills. “But they made me just as sick as my monthly period, so that remedy didn’t last too long,” she says. “I just sucked it up because I had always experienced this issue during my cycle. But the bleeding really interfered with my life, forcing me to schedule traveling or other activities around my period.”

In 2002, Cherry gave birth to her only child, a daughter. Seven years later, her gynecologist suggested she try a procedure called NovaSure endometrial ablation. The treatment entails the cervical insertion of a slender wand that expands an electrical mesh into the uterus. Next, radio waves emit an electrical current that destroys the lining of the uterus.

The best candidates for NovaSure are premenopausal women with heavy periods who want to quickly resolve this problem and don’t plan on having more children. “But I found out quickly that the procedure didn’t work because the same symptoms came back,” says Cherry.

Then, in 2011, she had a myomectomy, a surgery to remove her fibroids. This treatment also failed. “By this time, I was going to a more integrative doctor who talked to me about trying a nonsurgical approach—a change in diet, exercise and more naturopathic methods—to possibly reduce the amount of estrogen in my body,” she says. “I stopped eating meat and foods that reportedly induced the production of estrogen, and I saw major improvements in my weight, appearance and organ function. But the heavy menstrual bleeding continued.”

Cherry also explored an even more nontraditional pathway to healing. “Someone talked to me about an energetic, spiritual approach to fibroid treatment that recognizes that pain can be passed down from a mother to her child in the womb,” she says.

Cherry began seeing a local womb practitioner. “It was an amazing experience,” she says. “As an adoptee, I learned a lot about myself and how even though you’re adopted you are still a genetic reflection of your mother.”

At this point in Cherry’s journey, she reconnected with her biological family and uncovered more about her genetic history. “My biological mother did not have the kind of severe fibroid symptoms I had, but some of my full-blooded sisters did,” she says.

By 2018, nothing Cherry tried had worked. Her naturopathic health provider couldn’t believe how stubborn Cherry’s case was. “Nevertheless, she told me to keep doing what I was doing,” says Cherry. “She felt that the other benefits I had experienced were supportive of my health despite my continued symptoms.”

In October 2020, on her 50th birthday, Cherry’s menstrual flow began; it continued into the early months of 2021. “I wore two or three of those big purple pads and still soaked them all the way through,” she says. “That triggered pretty severe anemia.”

That February, Cherry noticed clots in her menstrual blood, which made her long for menopause. Fibroids need estrogen to grow, and during menopause, a woman’s level of the hormone decreases dramatically, which usually reduces the risk of developing fibroids. In many cases, fibroids actually shrink and cause fewer symptoms. However, this differs from woman to woman, as certain risk factors increase the risk for fibroid development both during and after menopause.

“My flow was so heavy that I was unable to have a good quality of life, so I returned to my gynecologist,” says Cherry. “She suggested I undergo uterine artery embolization.”

Doctors may sometimes suggest this treatment—also called uterine fibroid embolization, or UFE—for patients with complex medical histories. Performed by an interventional radiologist, this minimally invasive procedure involves inserting a thin tube called a catheter through a blood vessel in the leg or wrist that’s guided by X-ray images to the blood vessels that feed the fibroids. Tiny particles are injected to stop blood flow to the fibroids, which causes them to shrink gradually over a period of weeks and months.

When Cherry woke up one morning in early March, her feet ached, and she could hardly walk. She took a picture of her leg and sent it to her niece, a nurse, who showed it to the attending doctor at the hospital where she worked. He suggested Cherry get a sonogram at the closest clinic she could find. Once the technicians there saw her leg, however, they suggested she go to the hospital as soon as possible. “Turns out I had a blood clot,” Cherry said.

Pale and weak from her prolonged menstrual cycle and excessive blood loss, Cherry was admitted to the hospital as soon as she arrived. “I was advised to apply for charity care because at this point I didn’t have any health insurance and the UFE was going to cost $33,000,” she says.

UFE takes between 30 minutes to two hours and can be done using local anesthesia; patients spend six hours in recovery to monitor pain and nausea. Some patients may need to stay in the hospital overnight. Recovery takes between seven and 10 days, but doctors suggest that patients allot themselves one to two weeks to fully recuperate.

Cherry underwent the procedure with the support of her sister, who flew in from Texas to be there for the surgery and the early part of her recovery. “The day she left, the pain was so intense,” says Cherry. “I had to go back to the hospital and stay there for five days.”

Nearly 90% of women with fibroids who choose UFE experience relief of their symptoms, but Cherry did not. “When I finally got out the hospital, I was just happy to be alive and praying the bleeding would stop and I would get a little bit of relief,” she says.

In the meantime, Cherry forged ahead with her plans for her life. One month after the surgery, she secured medical clearance to travel to Sierra Leone to claim her status as a citizen by descent. “Basically, I was miserable for my whole 12-day trip,” she says. “I was bleeding everywhere, with no sanitary napkins available, and I was piecing toilet paper together!”

Today, Cherry’s periods remain heavy. She still experiences pain, but “it’s not the same pain I previously felt,” she explains. “I’m still exploring multiple ways to manage my symptoms, and I follow both naturopathic and allopathic [conventional] medicine to try to get benefits from both approaches to treating fibroids.”

Cherry, who is a certified integrative health coach, says she believes there is a root cause for her fibroids, and she will investigate their origin without any additional drug or surgical treatment.

“I’ve done all of these things, and my fibroids are still here,” she says. “So while I wait for menopause, I’m going to manage my diet to help heal myself on a cellular level. Normally, my life is great, and I’m energetic. I do all the things I need to do to stay healthy.”