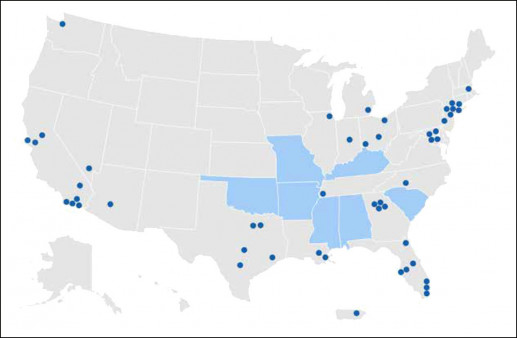 Ending the HIV Epidemic: A Plan for America Courtesy of HIV.GOV

Want PrEP From a Safety Net Clinic? There’s a One in Five Chance You’ll Find It

At the start of the “Ending the HIV Epidemic” initiative, safety-net clinics rarely offered PrEP directly.

Just 22% of the health clinics in the communities with the highest rates of HIV in the United States directly provided pre-exposure prophylaxis (PrEP) in 2018, according to a study published in Sexually Transmitted Diseases.

The study looked at access to HIV and sexually transmitted infection (STI) services, including PrEP, at city, county or regional health departments, both in the 51 areas that accounted for half of all new HIV transmissions in the United States in 2018 and outside those regions. Those 51 jurisdictions are the focus of the “Ending the HIV Epidemic: A Plan for America” (EHE) initiative, which aims to reduce new HIV cases by 75% by 2030.

President Joe Biden recently increased his budget request for the initiative by $267 million.

Researchers from the Centers for Disease Control and Prevention sent online surveys about HIV and STI services to the staff of 668 health clinics between March and May 2018. The clinics included those specifically for HIV and STI treatment and prevention as well as federally qualified health centers, family planning clinics, university clinics and general public health clinics. Fifty-one were in federal EHE areas; these clinics had the highest rates of syphilis, chlamydia and gonorrhea in 2015. The other 617 surveys went to clinics outside EHE areas that were matched for size and were geographically representative.

About half of the clinics (326) responded to the survey and 225 answered the questions about HIV and STI services. The bad news is that just 22% of clinics in EHE areas directly prescribed PrEP; nearly half (47%) provided education about PrEP and could refer clients elsewhere. But a full 30% of clinics didn’t offer any PrEP services at all. And this was no better in areas with the highest need for PrEP than in parts of the country less likely to see HIV diagnoses. It’s important to note, however, that these data precede the launch of EHE, which has been ongoing for three years now. So it’s unclear how well EHE clinics are doing now in offering PrEP.

The good news is that among clinics that did offer PrEP, 88% also provided ongoing medical management—the regular HIV and STI tests and other health checks recommended for people using PrEP—and 69% had a coordinator who helped clients afford PrEP. Plus, clinics in EHE areas were more likely to both say they offered same-day appointments and set aside time for them.

Click here for more news about PrEP and news about the “Ending the Epidemic” plan and localities.