How “Virginity Tests” Can Endanger the Health of Women and Girls

Plus: A 12-tweet tutorial on the hymen (that rapper T.I. needs to read)!

First off: The so-called virginity test is not based on biological or factual evidence. You cannot tell whether a woman is a virgin by examining her hymen. In other words: It’s a sham.

Clarification of this fact is necessary thanks the rapper T.I., who in a podcast interview last week claimed that he takes his daughter, now 18, each year to the gynecologist to ensure that her hymen is intact and that, therefore, she’s still a virgin.

This is horrible on so many levels. Let me educate you all about the hymen 1/12 https://t.co/fJHWIOg7sz

The hymen is a thin membrane of tissue that covers the vaginal opening. For a quick tutorial, check out the 12 tweets above by ob-gyn Jen Gunter, MD, in response to news about T.I.’s virginity tests.

The Los Angeles Times recounts the rapper’s conversation on the Ladies Like Us podcast: “This is what we do: Right after the birthday, we celebrate. And usually like the day after the party, she’s enjoying her gifts, I put a sticky note on the door: ‘Gyno. Tomorrow. 9:30.’”

The physician, he recounts, reminds him that his daughter must sign away her privacy in order for the doctor to share the results. T.I. responds: “I say ‘Look, doc, she don’t ride no horses, she don’t ride no bike, she don’t play no sports. Man, just check the hymen please, and give me back my results expeditiously.’”

The rapper’s story met with immediate backlash. The podcast hosts distanced themselves from the conversation and apologized for making light of the issue, posting on Instagram: “We support and love women and feel that their bodies are theirs to do as they wish.”

The controversy has had positive effects. It has provided a chance to expose the lie behind virginity tests, and it opened up a larger conversation about women’s sexual health and privacy.

Last year, for example, the World Health Organization released a statement calling for an end to virginity testing, also referred to as a two-finger examination. It is not possible to tell a “virgin” hymen from a “nonvirgin” hymen, the WHO statement reiterates. 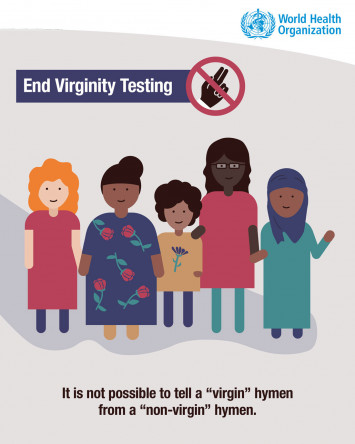 “Virginity testing is rooted in social norms that emphasize control of women’s and girls’ sexuality and bodies,” according to the WHO statement. ”Virginity testing is a violation of the human rights of girls and women and can be detrimental to women’s and girls’ physical, psychological and social well-being. Virginity testing reinforces stereotyped notions of female sexuality and gender inequality. The examination can be painful, humiliating and traumatic. Given that these procedures are unnecessary and potentially harmful, it is unethical for doctors or other health providers to undertake them. Such procedures must never be carried out.”

Reporting in The New York Times pointed out another danger inherent in the situation involving T.I. and his daughter. When youth believe that their private medical information will be shared with their parents, they might not be truthful with their doctors. This could lead, for example, to not getting tested for sexually transmitted infections or not inquiring about birth control or HIV prevention.

It should be noted that in the United States, according to the Times, after the age of 18, children have a right to keep their medical records private; parents must seek permission to discuss a child’s treatments and medical records with the doctor.