Posters from the exhibit and book “Up Against the Wall: Art, Activism, and the AIDS Poster” Courtesy of RIT Press/the University of Rochester AIDS Education Collection

On a Boston subway car around 1990, during the early days of the AIDS crisis, Edward C. Atwater, MD, noticed a poster depicting two hands unwrapping a condom packet. Fascinated by the illustration’s ability to clearly inform the public about sensitive topics such as safer sex—especially considering the prevailing discourse of 35 years earlier, when he attended medical school and it was illegal to teach contraception—Atwater procured his own copy of the AIDS poster. Over the years, he would acquire more than 8,000 others spanning 130 countries and 76 languages.

Before Atwater died in 2019 at age 93, the rheumatologist and medical historian donated his posters to the University of Rochester in New York, where they make up the AIDS Education Poster Collection within the River Campus Libraries’ Department of Rare Books, Special Collections, and Preservation. Amazingly, the entire collection has been digitized and can be viewed online (aep.lib.rochester.edu/browse).

For the first time, an exhibition and accompanying book cull from the collection to explore the myriad themes, narratives and histories found in the images. Up Against the Wall: Art, Activism, and the AIDS Poster runs through June 19 at the University of Rochester’s Memorial Art Gallery. It includes 165 posters, ranging from 1983 to 2018 (though the collection continues to grow, thanks in part to Jessica Lacher-Feldman, a special projects manager at the university).

Throughout the HIV epidemic, posters have remained one of the most popular, direct and cost-effective methods to educate the public, inspire compassion, incite protests and, when misused, to frighten and stigmatize—just think of all the images that associated an HIV diagnosis with death, a link no longer tolerated.

That negative connotation is portrayed in an untitled 2004 poster that depicts a couple in a postcoital embrace lying in a bed that is actually a coffin. The poster, by COCQ-SIDA, the Quebec coalition of AIDS organizations, based in Montreal, marked a turning point in the organization’s use of stigmatizing images. 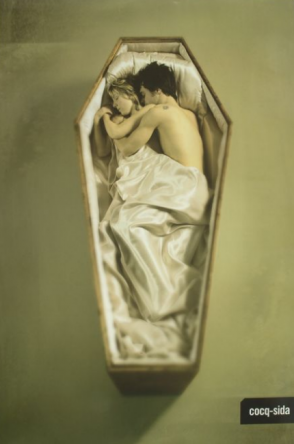 Untitled, 2004; Montreal, Canada; by COCQ-SIDACourtesy of the University of Rochester AIDS Education Collection

“[The ads] focused on the ‘death’ message, which was in direct contradiction with the work that COCQ-SIDA and its member groups were doing (and continue to do) to support the inclusion of people living with HIV in the lives of their communities,” writes Ken Monteith, the executive director of COCQ-SIDA, in the book Up Against the Wall. “The death message couldn’t have been clearer or more rejected by the community of people living with HIV. From then on, the COCQ-SIDA board of directors resolved not to accept campaigns proposed by ad agencies without having had a hand in their messaging.”

The Rochester exhibit organizes the posters into topics such as “AIDS Is a Women’s Issue,” “AIDS—Hidden Danger,” “I Have AIDS. Please Hug Me” and “Care Enough to Love Safely.” The posters were created by activists, community groups, governments, businesses and others.

Even among the North American posters, the intended audiences vary greatly, from the general public to specific populations, such as injection drug users, the LGBTQ community, women, Black Americans, Latinos and parents.

For the book and exhibition, a number of health experts, artists and advocates—including Avram Finkelstein of the Silence=Death Collective, Esther McGowan of the nonprofit Visual AIDS, artist Sur Rodney (Sur) and Anthony Fauci, MD—share their cultural and historical insights about specific posters. 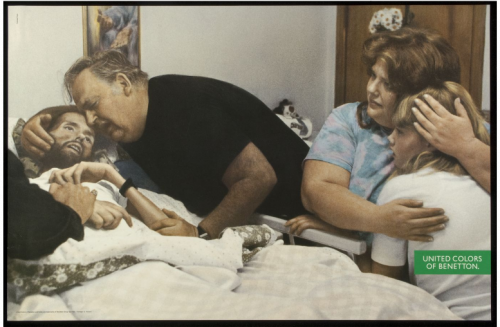 [The Death of David Kirby], 1992; New York City; by United Colors of BenettonCourtesy of the University of Rochester AIDS Education Collection

For example, Theodore (Ted) Kerr, a New York–based writer and a founding member of the collective What Would an HIV Doula Do?, adds important behind-the-scenes context to the controversial and iconic 1992 Benetton ad [The Death of David Kirby]. Kerr writes:

“The image, Final Moments (1990), was taken by Therese Frare the spring that David Kirby died of complications related to AIDS. Months after, the picture was published in LIFE magazine, iconically retitled The Face of AIDS. Two years later, it was used for what became an infamous Benetton clothing ad, even more powerfully titled La Pieta.…

“The hand on David’s wrist belongs to his caregiver, Peta, who, the day the photo was taken, invited Therese, a photography student at the time doing a project on AIDS, to follow as Peta did rounds at the hospice. Therese stayed in the hallway as Peta went in to check on David, a friend, who was near his final days. Therese had met David once before, and he had given her his permission to be photographed.

“As Peta visited with David, David’s mother invited Therese into the room, asking her to take photos of what could be their last moments all together. On Therese’s contact sheets from that day, Peta’s whole body can be seen: tall, with long hair pulled back, wearing a black leather jacket. In Peta we meet a caregiver from the Pine Ridge Indian Reservation living with HIV, who, as Therese recalls, ‘rode the line between genders.’

“After David died, the Kirbys made a commitment to care for Peta as death approached, and Therese continued to photograph.

“Let Peta’s wrist—and spirit—encourage viewers to look beyond the poster frame, searching for the stories untold, and the context needed to better understand the history and ongoingness of HIV/AIDS.”

Posters make an “immense and profound impact,” Donald Albrecht, the exhibit’s curator, tells POZ, adding that he was astonished by “the wide range of content and styles represented in the posters, from slick advertising-style graphics to simple hand drawings, from expressions of grief to humor and irony.

“It is my hope,” Albrecht adds, “that these posters from the past provide models for action today.” 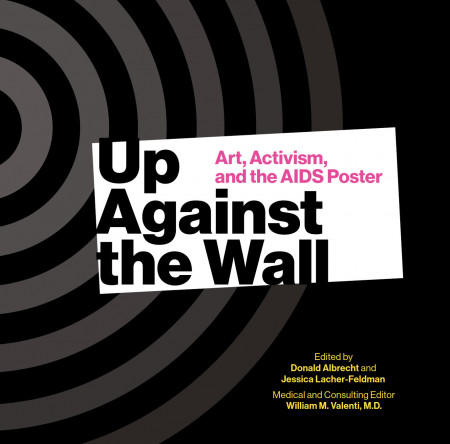 The book cover of “Up Against the Wall: Art, Activism, and the AIDS Poster”Courtesy of RIT Press