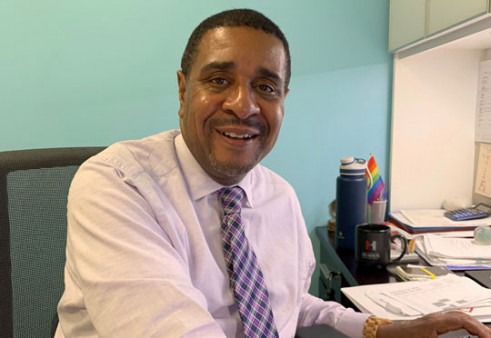 Harold Phillips was previously the senior HIV advisor and chief operating officer of “Ending the HIV Epidemic: A Plan for America.” Office of Infectious Disease and HIV/AIDS Policy

The U.S. Finally Has a New AIDS Czar!

Harold Phillips, a Black man living with HIV, is the new director of the White House Office of National AIDS Policy (ONAP).

AIDS advocates nationwide are congratulating Harold Phillips on his appointment by President Joe Biden as the new director of the White House Office of National AIDS Policy (ONAP). An official announcement is pending, but that hasn’t delayed the showering of praise on social media from leaders in the world of HIV/AIDS and public health.

A Black man living with HIV, Phillips brings a wealth of professional—as well as personal—experience to his new post. Many advocates and health leaders have had years of experience working with Phillips, who most recently served as the senior HIV adviser and chief operating officer of the “Ending the HIV Epidemic” initiative. In that capacity, he worked in the Office of Infectious Disease and HIV/AIDS Policy (OIDP) and helped oversee and coordinate the initiative’s activities across the divisions of the Department of Health and Human Services.

Harold brings decades of experience in the battle against HIV/AIDS, and we’re lucky to have him spearheading the Biden-Harris Administration’s efforts to defeat this epidemic.

“I’m thrilled to welcome Harold Phillips to lead the White House Office of National AIDS Policy,” tweeted Susan Rice, the director of the U.S. Domestic Policy Council, on June 5. “Harold brings decades of experience in the battle against HIV/AIDS, and we’re lucky to have him spearheading the Biden-Harris Administration’s efforts to defeat this epidemic.”

News of Phillips’s appointment at ONAP arrived June 5, which coincided with the 40th anniversary of the first reports of AIDS. (To read President Biden’s remarks to commemorate 40 years of HIV/AIDS, see “We Must Rededicate Ourselves.”) June 5 also marks the annual HIV Long-Term Survivors Awareness Day.

Fenway Health, an HIV and LGBTQ health center in Boston, issued a statement on Phillips’s new appointment to ONAP. “Fenway Health applauds this vitally important appointment to the White House Office of National AIDS Policy. Although we are 40 years into the HIV epidemic and have all of the antiretroviral tools needed to end the transmission of HIV, science alone will not end the epidemic. We also need robust support for programs that mitigate the social barriers to HIV treatment, care, and prevention, which include racism, transphobia, and anti-LGBTQIA+ bias,” said Ellen LaPointe, CEO of Fenway Health, in the statement. “Phillips has deep expertise in designing and implementing the targeted community engagement strategies needed to end the domestic HIV epidemic. He is also an expert in global initiatives to end HIV. We will need both approaches to end the HIV epidemic.”

“With your new appointment, community needs you to fight. While we are very happy that you got this job, it only works if you fight for us. As a member of the White House’s Domestic Policy Council, we need you to bring the fight to end HIV to them. Too many people think the epidemic is over. Your voice represents more than you, it is the voice of the multitude of communities fighting HIV.

“It is time to reconstitute the President’s Advisory Council on HIV/AIDS (PACHA), and it needs to be real. Your office needs the support of a Council that embraces the White House’s commitment to racial equity across government, a Council that understands it’s here to support you and the President to end the HIV epidemic.”

You can read the letter in full on Kawata’s POZ Blog, under the headline “Dear Harold.”

The fact that ONAP will have leadership at all is in itself newsworthy. As POZ reported in a March 2018 story titled “U.S. Has Gone More Than a Year Without an AIDS Czar,” President Donald Trump failed to appoint a new director when the previous one, Amy Lansky, stepped down after he settled in the White House. Nicknamed the nation’s AIDS “czar,” the director of ONAP coordinates the nation’s response to the HIV epidemic, implements the National HIV/AIDS Strategy and listens to the HIV community and health leaders.

President Bill Clinton established ONAP, but after Trump took office, the ONAP website was no longer kept up to date, and it wasn’t even clear whether the office was in operation. Exacerbating the situation was the fact that Trump fired all the remaining members of the Presidential Advisory Council on HIV/AIDS (PACHA) in December 2017, a few months after six other members had resigned in protest of his policies. Over a year later, nine new members were named to the council, along with two cochairs.

“The HIV epidemic is a complex and pressing problem, and requires addressing multiple health care, legal and social services issues together with confronting the marginalization and discrimination experienced by the communities most heavily impacted by HIV/AIDS,” Crowley writes. “ONAP plays an essential role by coordinating the federal response and extending presidential leadership to this critical global challenge. Having led the development of President Obama’s first National HIV/AIDS Strategy in 2010, I was gratified when President Biden committed to reestablishing ONAP and developing a new National HIV/AIDS Strategy. Harold’s demonstrated leadership makes him the right person to ensure that the Biden-Harris administration moves aggressively to meet the goal of ending the HIV epidemic in the United States by 2030.”

Need a refresher on the “Ending the HIV Epidemic: A Plan for America” initiative that Phillips helped advise? Launched in 2019, it’s a 10-year federal initiative that aims to lower new HIV rates by 75% by 2025 and 90% by 2030. This would amount to fewer than 3,000 HIV cases a year. “Reducing new infections to this level,” according to the initiative, “would essentially mean that HIV transmissions would be rare and meet the definition of ending the epidemic.” The strategy for reaching these benchmarks involves investing federal funding and resources in 57 key jurisdictions. This translates to the 48 counties plus Washington, DC, and San Juan, Puerto Rico, that together account for 50% of new HIV cases, plus seven rural states with high HIV burdens: Alabama, Arkansas, Kentucky, Mississippi, Missouri, Oklahoma and South Carolina.

What’s more, the plan focuses on four pillars of action:

How’s your state doing in the nation’s plan to end HIV? Find out with the interactive AHEAD dashboard. To learn more about “Ending the HIV Epidemic,” read an overview at HIV.gov and visit the official webpage at HRSA.org. For a related POZ article, see “Plans to End the HIV Epidemic at Home and Abroad.”