This behavioral disorder wreaks havoc on appearance and self-esteem. 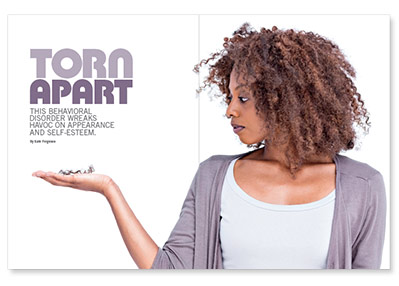 Click here to read a digital edition of this article.
At the age of 13, Hannah, then a young girl in Sarasota, Florida, began to tear out her tresses. One morning, she woke up to find a pile of hair on her pillow: She’d pulled out a handful of her thick, beautiful hair during the night. Hannah hid her behavior from her family for several years, until her mom finally noticed a bald spot on the front of her head.

If you search YouTube for trichotillomania, a.k.a. “trich” or TTM, you’ll find Hannah’s story among a number of videos about this disorder. Most of the videos show women or girls who compulsively pull hair from their scalp, eyelashes, eyebrows, legs or other parts of their body. But men also suffer from this disorder.

Although Hannah thought she was the only person “on the face of the planet” who did this, she later learned that she was not alone. According to estimates by the Trichotillomania Learning Center (TLC), a nonprofit organization that’s an educational resource about the disorder, about 2 million to 10 million Americans suffer from trich. What’s more, the disorder affects people of all ages, genders, ethnicities, nationalities and backgrounds.

There are many reasons why some people pull out their hair. Findings show that the disorder is neurological and may be genetic, so scientists are studying people who suffer from trichotillomania to isolate genes that may be at fault.

While some researchers focus on possible biological causes of trichotillomania, others continue to search for better ways to treat this disorder that has no known cure. Still, many treatments are available and have helped “thousands of people to become pull-free,” says the TLC.

One effective treatment for trich is cognitive behavioral therapy (CBT), a method psychologists use to interrupt hair-pulling as a response to things that trigger the behavior. Another approach is drug therapy, which may be used along with CBT. But “there is no magic pill for the treatment of trichotillomania” because “people respond very individually to medications, so there will never be a single drug that helps everyone,” explains the TLC.

Some trich sufferers report that alternative therapies have worked for them. Many of these unproven methods, such as diet changes, hypnosis, prayer, yoga and herbal remedies, often have no scientific support for their effectiveness. Therefore, the TLC suggests that those suffering from trich may do best to explore these therapies with an open, but also cautious, mind.

Additionally, trich sufferers may want to connect with a support group. Because so often people feel isolated when they are suffering from a disorder, experts advise finding a support group that’s led by a therapist, or  individuals who are members of a peer group.

For Hannah, the feeling that she was the only person suffering from hair-pulling caused her to believe she was crazy and strange for wanting to harm herself. When her mother learned about her hair-pulling episodes and took her to psychologists, Hannah was shocked to find that there was no name for this illness.

Indeed, it is only within the past two decades that trich and similar body-focused repetitive behaviors have gotten attention in mental health literature or skin and hair care circles, states the TLC. But, as Hannah and her mom found, help is available.

After she found a hair salon that helped her recover the tresses she lost to hair-pulling, Hannah decided to disclose her disorder to others. That’s when she joined other advocates who chose to reveal their personal stories about suffering from trich online. Many of the tales were heartbreakingly similar. But so were the reasons these advocates had for speaking out.

“I knew that I couldn’t keep quiet about my secret anymore,” Hannah says. “I wanted to be able to help girls all over that were just like me, and I wanted to let them know they aren’t alone. There is hope, and there is help.”