For people experiencing tinnitus—the perception of annoying ringing and buzzing noises when none exist—the best sounds of all are the sounds of silence. 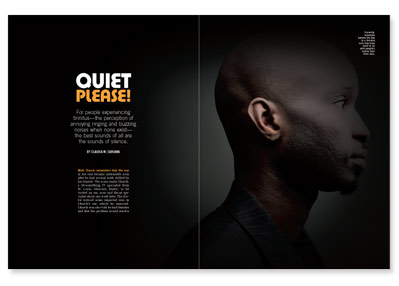 Mark Church remembers that the roar in his ears became unbearable soon after he had several teeth drilled by his dentist. The noise made Church, a 50-something IT specialist from St. Louis, Missouri, frantic, so he visited an ear, nose and throat specialist about one week later. The doctor noticed some impacted wax in Church’s ear, which he removed. Church was also told he had tinnitus and that the problem would resolve itself. It didn’t. When the loud cricket chirping sound continued to drive him crazy during the day and keep him awake at night, the doc said Church would just have to live with it.

But today, with the help of a different ear, nose and throat specialist (an ENT, also called an otolaryngologist) at a local medical center, Church is coping with tinnitus. The doctor suggested Church undergo cognitive therapy and prescribed low-dose Xanax. But Church also learned how to counteract the noise from his tinnitus by playing the static on a cheap AM/FM radio. Now, Church advocates for tinnitus awareness and organizes an annual bicycle event called the Tour de Tinnitus that’s supported by the American Tinnitus Association.

A big part of the problem driving tinnitus is that we live in a very noisy world, says Richard S. Tyler, PhD, a professor of audiology in the Department of Head and Neck Surgery at the University of Iowa.

“In addition to loud concerts, there are subways and trains screeching to a halt, airplanes flying overhead, noisy power tools and firecrackers, law enforcement personnel using guns on the job or on a shooting range,” Tyler says. “Plus, of course, people continue to use MP3 players. All [of these things] contribute to the problem.”

In fact, estimates are that more than 30 million Americans, about 10 to 15 percent of the population, experience tinnitus in varying degrees, from mildly annoying to severely incapacitating, at some time in their lives. Often, they develop permanent hearing loss as well.

Not surprisingly, many of these individuals are on active military duty or they’re returning veterans who  were subjected to the thundering noise of bombs, heavy equipment and artillery. Reports from the U.S. Department of Veterans Affairs show an increasing amount of noise-induced hearing loss cases and tinnitus among military workers. In fact, the condition was the most common service-connected disability for veterans who received compensation at the end of the 2010 fiscal year.

Although many people with tinnitus experienced loud noises, the condition can also be triggered by certain illnesses, such as Meniere’s disease, as well as by prescription and over-the-counter drugs. Other common culprits include hormonal changes, TMJ problems (jaw disorders), ear infections and brain tumors. It can even develop for no apparent reason. Tinnitus can be short-term, for example, lasting just a few days after a rock concert, or it can last indefinitely.

Experts are concerned that the number of individuals with tinnitus continues to grow. Many are young adults and those in their 20s. Children can experience tinnitus too—but they may not be able to explain their problem.

There is no cure for tinnitus, and the condition can be difficult to manage. To confound the problem, a treatment strategy that works for one patient might not work for another. That’s why one of the major challenges in finding a cure is learning what really happens in an individual’s ears and brain.

The important thing, says Jed Kwartler, MD, a clinical professor in otolaryngology at the University of Medicine and Dentistry of New Jersey, and who has a private practice in Newark, is that those with tinnitus don’t listen to anyone who says, “Just go home and live with it.”

Like a growing number of experts, Kwartler believes tinnitus is a “brain issue” that researchers are just now beginning to understand.

“Studies done with functional magnetic resonance imaging, a.k.a. fMRI, a noninvasive way to monitor brain activity, show increased action in areas of the [brain’s] temporal lobe and brain stem for people suffering from tinnitus,” Kwartler explains. “Since this activity is in the brain’s auditory pathway, the brain thinks it is hearing noises coming from the ear, but the sound is not generated in the ear.”

White noise isn’t the only solution. Generally, to help treat tinnitus, doctors choose from a range of options. Here, Real Health rounds up the most common ones.

Diet changes. Michael D. Seidman, MD, the director of Otologic/Neurotologic Surgery at the Henry Ford Hospital in West Bloomfield, Michigan, recommends his patients avoid salt, caffeine, alcohol, simple sugars, artificial sweeteners and MSG. “Sometimes, this makes a difference, sometimes not, but it is a good starting point because any of these ingredients could be responsible, in total or in part, for tinnitus,” he says.

Treatment for hearing loss. Because many individuals experience hearing loss in addition to their tinnitus, a hearing evaluation often shows that patients need a hearing aid. Sometimes hearing aids, according to Kwartler, can help individuals suffering from tinnitus by reducing or eliminating their perception of sounds. Plus, the devices improve patients’ hearing.

Biofeedback, hypnosis, acupuncture. These alternative treatments can help some patients, Kwartler says. But he also cautions that several medical research studies show acupuncture is not very effective as a tinnitus treatment.

Transcranial manipulation. These head and face massage techniques can help people with tinnitus, says Jennifer Caudle, DO, an osteopathic family physician practicing in New Jersey. They are especially promising, she adds, “if there is an underlying TMJ problem.”

Tinnitus retraining therapy. This treatment works best when doctors combine the use of an audio source, such as a sound machine or static on an old radio, with cognitive behavioral therapy. (Cognitive behavioral therapy is a common type of mental health counseling.) This one-two combination successfully reduces the awareness or annoyance of the tinnitus in about 70 percent of patients. According to Seidman, this is probably the most frequently suggested treatment.

Alternative treatments. Some include hypnosis and taking zinc and lipoflavonoid supplements.

Antianxiety and antidepressant medications. Doctors often prescribe these drugs to manage the depression or sleep disturbances common among many patients with tinnitus, according to Seidman.

Experimental invasive brain procedures. Research by Steven Cheung, MD, a neurological surgeon at the University of California at San Francisco, shows phantom tinnitus sounds come from the brain. Cheung believes that invasive treatment options, such as cochlear implants—surgically implanted electronic devices used to treat hearing loss—may offer some hope for the 10 to 15 percent of people with chronic tinnitus.

Check out the American Tinnitus Association at ata.org.

Listen Up!
Loud sounds can destroy your hearing, and once it’s gone, it’s gone for good.

Tiny, irreplaceable cilia hairs in our inner ears help us to hear. But, over time, these sensitive hairs can be damaged by loud noise. In some instances, they can be destroyed immediately.

According to news reports, Chris Martin, Cold Play vocalist and husband of actress Gwyneth Paltrow, and rapper Plan B know firsthand what playing and listening to loud music can do: Both have tinnitus and hearing loss. As a result, the two recently joined with musician Gary Numan to start a charity campaign named Action on Hearing Loss. The mission of the campaign is to raise people’s awareness about the importance of protecting their hearing.

Because even everyday sounds can damage hearing, experts suggest you create an action plan to protect your hearing or prevent further loss. Here’s the 411: Sound is measured in decibels (dBs), and sounds of 85 dBs or above can be damaging, even painful, to your ears. The noise from an approaching subway train 10 feet away can measure 100 dBs; a jet engine, 140 dBs; and a chain saw, 110 dBs. Compare this to normal conversation, which measures about 60 dBs.

Have a hearing test. The good news is hearing tests now are covered by most medical insurance plans and Medicare. What’s more, some plans may also cover hearing aids. To get started, ask your family health care provider for a referral. In addition, regularly have children’s hearing evaluated.

Use hearing protection. If you work with power tools or other machinery, or if you love to attend live concerts, this is a must-do. For the most effective protection from loud sounds, you might need to combine ear plugs with ear muffs. In fact, carry ear plugs with you wherever you go and use them when needed.

Turn down the volume. Moderate use of iPods at low levels is not problematic, but using them for three or more hours each day could lead to hearing problems, especially if the volume is high, says audiology professor Robert S. Tyler, PhD, at the University of Iowa. In addition, sound settings on one brand of MP3 player may differ from those of another brand, so it’s difficult to recommend a particular volume setting for playing it safe. That’s why it’s best to just keep iPod volume settings on low.

What to Do About Age-Related Hearing Loss 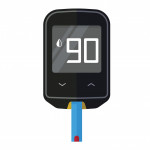