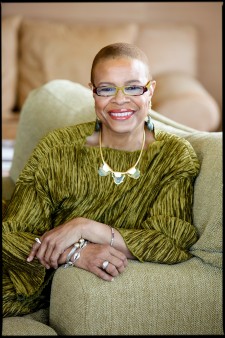 In 2004, I was diagnosed with clinical depression. Everyone wears a mask and feels that having challenges is a sign of weakness. Everyone inherits the unresolved pain and trauma of their parents, so we have very wounded people who are raising children, and they’re unable to parent properly because they haven’t dealt with their issues. All that impacts the kids.

Diane Weathers, then editor-in-chief of ESSENCE magazine, asked me to share my story in the publication. That’s when the floodgates opened. People deluged the magazine with thousands of letters. The reaction was stunning and overwhelming. I began working on a book, Black Pain: It Just Looks Like We’re Not Hurting, to share stories about depression from others in the black community. After the book was published, I launched a campaign called “Healing Starts With Us” through my then nonprofit organization, The Stay Strong Foundation.

The campaign generated a series of Open Book forums. These were community gatherings where people would share and listen to the testimony of others who have experienced depression. These were opportunities for people to come forward and speak their truth. You never know who you’re going to touch when you share your story or speak about the issue of mental health. It’s the huge elephant in the room everywhere we turn.

We have to break the pain of silence and talk about this stuff. We have to share our stories with one another so people don’t feel they’re standing on the ledge alone. It’s important to normalize mental health treatment so that seeing a therapist is just like going to see any other doctor. How is it that it’s much more acceptable to get physical health care and visit a medical doctor, but you don’t always get the same reimbursement for mental health care?

People are hurting and when we don’t speak about it, it keeps us from being all that God has called us to be. It’s just that simple. There are clinics where you can get treatment on a sliding scale or for next to nothing. Once you awaken this in people, they have options.

I’m excited about the work of “Healing Starts With Us” because it is our only recourse. It’s powerful to talk about depression at every corner, wherever there’s a group of people gathered to just share ourselves with one another, to remove the mask and casually bring the issue up in conversation.

That’s what one can do on a personal level. Listen to the things people say and listen to the things people don’t say. You can fine-tune your ability to see how people are doing. And if somebody says, “Well, I’m hanging in there taking it one day at a time,” you can say something that will allow that person to feel that they are not alone. You can do that; we can do that.