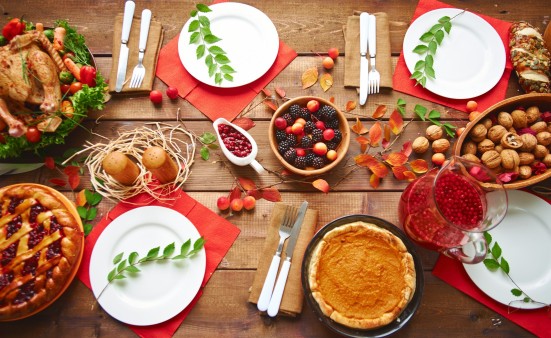 When you think about spending time with friends and family this holiday season, are you gripped with joy and dread about creating those savory special-occasion dinners and sweet desserts that can throw off months of sticking to a diet? If so, don’t worry. You can cook familiar dishes in new ways that will allow you the guilt-free enjoyment of eating some of your favorite meals of the season.

“What makes holiday dishes so terribly unhealthy and fattening is not the fact that they contain fat. It’s that they contain the wrong kind of fat and a ton of sugar, an absolutely lethal combination from the point of view of health,” says Jonny Bowden, a board-certified nutritionist and author of The 150 Healthiest Foods on Earth. “High-calorie, high-fat [the wrong fats] and high-sugar meals are a trifecta for diabetes, obesity and heart disease.”

But the good news is, you can make healthier holiday meals and desserts by reducing or replacing sugar, salt and unhealthy fats without sacrificing taste. You can significantly cut back on starches and other unhealthy ingredients by using smart substitutions and making healthier choices.

Reduce or replace this refined sweetener with spices, such as cinnamon, allspice and nutmeg, or use extracts, such as vanilla, peppermint or almond. You might also try adding sweetness with a plant-based sugar substitute, such as stevia.

Replace this high-fat liquid in desserts with fat-free or skim milk or low-fat buttermilk. Depending on the recipe, you can also substitute whole milk with soy milk or nut milks, such as almond, or use plain yogurt.

Use fat-free half-and-half or evaporated skim milk instead of full-fat cream to keep dishes rich and satisfying.

The Culprit: Butter, margarine, oil or some other shortening

If you must use fats, opt for a vegetable oil, such as olive oil. Bowden suggests you “choose from non-hydrogenated [no trans fat] oils that are great for cooking, such as grass-fed butter, ghee, coconut oil and certified sustainable palm oil.” Another option? Apply cooking spray or opt for nonstick pans.

If you’re using shortening to bake desserts, use half of the butter or other shortening, and replace the other half with some unsweetened or cinnamon-­flavored applesauce, mashed banana, prune puree, plain Greek or soy yogurt or even mashed avocado.

Apple pie on average is 360 calories per slice; pecan pie is a whopping 503. Switch to either sweet potato or pumpkin pie, which, depending on how they’re made, are usually lower in calories and have more nutritional value.

Crusts add extra calories to pies. Double crusts can add a hefty 240 calories. Instead, make a crust-free dessert, for example, apple crisp instead of apple pie.

Replace these sugary calorie-boosting extras with dried fruit, such as cranberries or cherries.

If you don’t want to skip the boozy beverages, sip still or sparkling water between each drink to prevent overindulgence and to lower the amount of alcohol and calories.

And if you’re not indulging but still need a glass in your hand, fetch a flute of sparkling water. Downing more H2O will keep you from drinking and eating too much.

Instead of sugar in cocktails, use freshly squeezed juice (like lemon or lime) or 100 percent fruit juice.

In dairy-based drinks, replace the whole milk and heavy cream with low-fat or skim milk. For example, you can still savor the rich taste of eggnog without the surplus calories. Fill the glass with one half to three quarters low-fat or skim milk and one part nonalcoholic eggnog.

The Culprit: Ham hocks or bacon fat for seasoning

Use low-fat, low-salt chicken or vegetable broth. For diehard fans of ham hocks, “You don’t need to replace the ham hocks if you can find pastured pork,” Bowden says. “Otherwise, collard greens are a great vegetable. Try using just a bit less salt and a lot more flavorful spices.”

Try mixing a combination of herbs or spices with salt-free seasoning, lemon juice, rice vinegar and pepper to flavor foods. “Use turmeric, oregano, basil, sage, rosemary,” Bowden suggests. “All have remarkable health benefits and will reduce the amount of salt you need.”

The Culprit: Bread and pasta

Instead of processed white bread, pasta and flour, select their whole-grain counterparts. If you don’t like the taste of whole-wheat baked goods, measure and mix one-half white flour with one-half whole wheat flour for cakes, muffins and other goodies from the oven.

The Culprit: Macaroni and cheese

Again, reach for whole-grain pasta. For the creamy texture of butter and cream—without the fat—replace butter and cheese with nonfat Greek yogurt and either reduced-fat, fat-free or 2 percent milk and cheese, or simply use less cheese.

Arrive late to miss cocktails and snacks. If you can, make a dip at home with low-fat or nonfat plain Greek yogurt or nonfat sour cream and bring your own crudités, such as raw carrots, cauliflower and broccoli florets, slices of bell peppers and other crunchy veggies.

Other ways to make food healthier:

More Substitutions for Your Festive Foods

Modify these top 10 foods to create healthier counterparts and save a ton of calories this holiday.

Skim the fat from drippings, or make gravy with fat-free or low-fat turkey broth, flour and seasonings.

Skip the packaged kind, and make your own using whole-grain bread, or replace bread with wild-rice stuffing.

Roast the yams instead of pairing with marshmallows or tossing in brown sugar.

Make a relish from scratch with fresh cranberries.

In this otherwise healthy choice for a meal, don’t diminish the nutritional value of collard and other greens by overcooking and adding unhealthy extras, such as salt, ham and bacon. Instead, gently sauté in low-fat and salt-free broth.

Use coconut milk instead of heavy cream.

You can either use reduced-fat butter and skim milk to lower the fat content, or swap the spuds with mashed cauliflower or mashed cannellini beans.

Ditch the store-bought rolls. Reach for whole grain bread, and skip the butter.

Choose cider instead of eggnog. If you drink wine, exchange for a fruity sangria made with spiced teas infused with fruit slices.