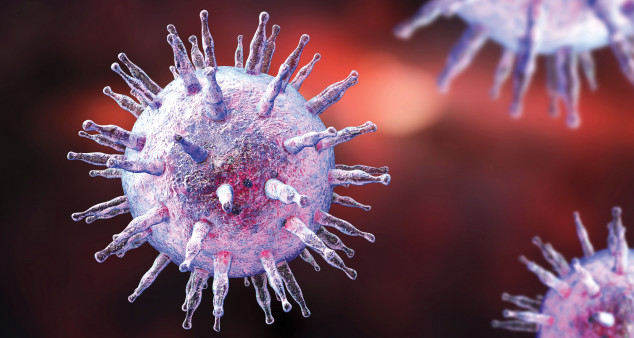 February 4, 2022 • By Brian Doctrow and National Institutes of Health

Multiple sclerosis (MS) is an autoimmune disease that affects the central nervous system. In people with MS, the body’s immune system attacks the insulating layer that surrounds nerve cells, often killing the cells.

The underlying cause of MS remains unknown. One possibility is that it’s triggered by a viral infection. Epstein-Barr virus (EBV) has been among the top suspects. EBV is a herpes virus that often causes no symptoms. However, it can cause infectious mononucleosis, or mono, in some people. After an EBV infection, the virus remains in a latent state within cells and, in some cases, may reactivate. EBV eventually infects about 95% of adults, but very few will develop MS.

To explore whether there is a link between MS and EBV, a team of researchers studied more than 10 million active duty U.S. military personnel between 1993 and 2013. Dr. Alberto Ascherio from the Harvard T.H. Chan School of Public Health led the study. NIH’s National Institute of Neurological Disorders and Stroke (NINDS) partly supported the work. The results appeared in Science on January 13, 2022.

Active-duty soldiers have blood samples taken every two years as part of routine medical screenings. The Department of Defense Serum Repository contains serum left over from these screenings. From these samples, the researchers determined whether—and when—donors were infected with EBV. They tested samples from 801 people who developed MS. They then compared these to samples from more than 1,500 matched controls (people with similar characteristics who did not develop MS).

The team found a much higher rate of EBV infection among people who developed MS than among controls. Out of the 801 MS cases, only one person tested negative for EBV in their last sample collected before MS onset. The team calculated that people infected with EBV were 32 times as likely to develop MS as uninfected people.

The researchers found no such association between MS and any other human viruses. This included cytomegalovirus (CMV), a virus distantly related to EBV that is transmitted similarly.

The team also measured blood levels of neurofilament light chain (NfL), a biomarker for nerve degeneration. NfL levels increased in people who developed MS compared to those who did not. The increase occurred only after EBV infection and usually before MS diagnosis. This finding shows that the nerve degeneration that accompanied MS did not start before infection with EBV.

The researchers say that the association between EBV and MS risk was too strong to be explained by any other known MS risk factors. The findings strongly suggest that EBV is part of the chain of events that leads to most cases of MS. However, EBV in itself is not sufficient to trigger MS. Other unknown factors certainly play a role.

“The hypothesis that EBV causes MS has been investigated by our group and others for several years, but this is the first study providing compelling evidence of causality,” Ascherio says. “This is a big step because it suggests that most MS cases could be prevented by stopping EBV infection.”

This research brief was published by the National Institutes of Health on February 1, 2022.