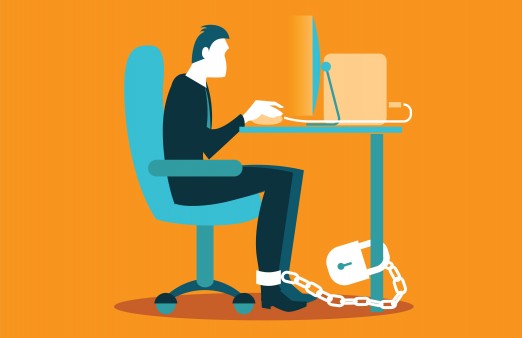 Good Reasons Never to Sit Down On the Job

When it comes to staying seated all day at work, the consensus from health experts is clear: We should be standing up way more often to avoid the risk of obesity and heart-related illness. Now, recent findings, published in the British Journal of Sports Medicine, suggest exactly how much time each day we should relinquish our office chairs and stand, reports Time.com.

According to the study’s statistics, office workers typically spend 75 percent of their day sitting down. What’s more, the stats showed more than half of that time sitting down results in positions that keep folks motionless for 30 minutes or more.

In addition, several studies published over the past two years showed that motionless, prolonged sitting is correlated with a higher risk of chronic conditions, such as diabetes, obesity and heart disease. What’s more, another study also linked more sitting down than standing each day to an increased risk of cancer.

As a result of these findings, researchers issued the first set of expert recommendations that urged people to stand at least two hours a day while they worked. The scientists said the two-hour standing time doesn’t have to be all at once. They suggested breaking up the time into small breaks of standing, pacing or walking around. (This means a trip to the restroom or coffee machine totally counts.)

But study authors also said the two-hour recommendation was just a starting point. To get full health benefits, the ultimate goal to shoot for is four hours of standing up during the day.

“This is an initial guidance, which we do expect to evolve with time,” said John Buckley, MSc, a professor at the Institute of Medicine at the University of Chester in the United Kingdom, and the study’s lead author.

Buckley and his research team are already gathering more data on how lack of movement in the workplace can affect employees’ overall health, as well their productivity and professional performance.

For an easy workout you can do on the job, click here.