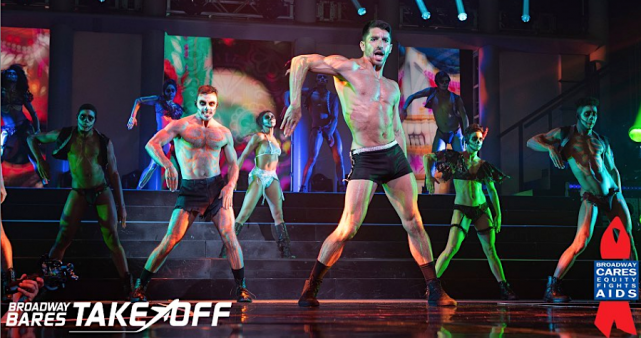 The bright lights of Broadway may have temporarily dimmed during COVID-19 shutdowns, but, as all performers know, the show must go on! The same goes for HIV fundraisers. As curtains on the Great White Way rise once again, beloved AIDS fundraising efforts return to the stage.

Now until May 1, the iconic red buckets of Broadway Cares/Equity Fights AIDS (BC/EFA) will make appearances at shows on Broadway, Off-Broadway and those touring the nation. In this decades-long tradition, actors make appeals to audiences after the curtain call, then hold out red buckets to collect donations as folks exit the theaters.

Also returning live and in the flesh this year are the annual (and very popular) Broadway Backwards and Broadway Bares.

For Broadway Backwards, which began in 2006, men perform songs penned for women, and women sing those originally composed for men, giving the tunes a queer twist. This year’s show is scheduled for Monday, May 23, at Broadway’s New Amsterdam Theatre. Tickets go on sale in April; visit BroadwayCares.org for more details.

Here’s Darren Criss in “Getting Married Today” from Broadway Backwards 2019:

Broadway Bares, a jaw-dropping (and pants-dropping) burlesque spectacular, returns for its 30th anniversary with a 9:30 p.m. and midnight show Sunday, June 26, at the Hammerstein Ballroom. The theme and special guests will be announced later, but tickets are available now on BroadwayCares.org.

As always, you can purchase autographed items and Broadway memorabilia online via the Broadway Cares eBay Store.

Check the website for upcoming details on the Fire Island Dance Festival, slated from July 15 to 17, and the Red Bucket Follies on December 5 and 6.

BroadwayCares.org also includes details about season 2 of the virtual fundraising contest Broadway’s Masked Singer, which is broadcast March 21, March 28 and April 4. You can watch the first episode below:

Although this spring campaign marks the return of the red buckets since the early 2020 COVID-19 shutdowns, that doesn’t mean that BC/EFA fundraisers went dark during the pandemic. For example, last year’s virtual event Broadway Bares: Twerk From Home, filmed as mini-movies, raised $349,434.

What’s more, BC/EFA continued to offer grants and financial support during the pandemic. According to its website, since March 2020, the organization awarded over $35 million in grants to The Actors Fund and 450 social organizations across the nation. Earlier this month, BC/EFA anounced it was sending $300,000 to humanitarian efforts to help Ukrainians.

One show absent from the spring fundraising lineup is the Easter Bonnet Competition. “As Broadway, Off-Broadway and national touring shows have returned to their theaters, it has been our utmost priority to respect the work it takes to get these productions up and running,” Broadway Cares executive director Tom Viola said on the website. “Delaying the return of the Easter Bonnet Competition performances until next year allows shows to step back first into fundraising efforts while maintaining their current safety protocols. This tiered approach—a trial run of appeals last fall followed by a full season of appeals this spring—will allow productions to enthusiastically join us this fall in both our fundraising and in the return of the celebratory Red Bucket Follies performances, which will lift the roof of the New Amsterdam Theatre on December 5 and 6.”

To learn more about the history of Broadway Cares/Equity Fights AIDS and how the funds support HIV/AIDS family service programs as well as research, see the POZ cover story “The Show Must Go On.”