SF HIV Cases Creep Up, Maybe Due to Changes in Testing

For the first time, gay and bi men who don’t inject drugs accounted for less than half of new cases in San Francisco.

The number of new HIV diagnoses in San Francisco rose in 2021 for the first time in nearly a decade, although this could be due to changes in testing in the wake of COVID-19, according to the latest HIV Epidemiology Annual Report from the San Francisco Department of Public Health (DPH). And for the first time ever, gay and bisexual men who don’t inject drugs accounted for less than half of new cases. HIV care indicators have generally improved or remained stable, but disparities persist, especially for people experiencing homelessness. 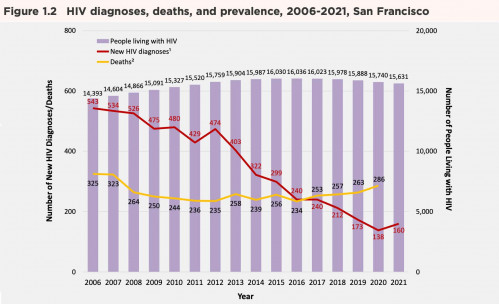 This year’s report leads with a new section devoted to changes in testing, which suggests that the latest statistics are influenced by disruptions related to COVID. In the spring of 2020, both HIV screening tests and viral load tests dropped dramatically. HIV testing at medical sites fully recovered in 2021, but testing at community sites still lags. Health officials suspect the low number of new cases in 2020 may have been an undercount due to decreased testing, while the higher number in 2021 might reflect numbers catching up as more people got tested.

Latinos made up the largest share of new cases in 2021, at 38%, followed by white people (33%), African Americans (16%) and Asians and Pacific Islanders (9%). But Latino and Black people have disproportionately high HIV rates relative to their share of the city’s population (16% and 6%, respectively). Diagnosis rates in 2021 were 3.3 higher for Black men and 2.8 times higher for Latino men compared with white men.

Nearly 80% of newly diagnosed people were cisgender men. The 14% share of new cases among cisgender women was similar to the 2020 figure but up from 8% in 2019. Transgender women accounted for 8% of diagnoses, and transgender men for less than 1%. No children have been diagnosed with HIV in San Francisco since 2006.

Gay and bisexual men who don’t inject drugs accounted for 49% of new HIV cases—the first time this proportion fell below half. This compares with 57% in California and 67% nationwide.

However, SF DPH counts men who have sex with men and transgender women who inject drugs as a separate categories. In fact, gay and bi men (14%) and trans women (1%) together accounted for a majority of the 27% of new cases among people who inject drugs. Nearly a quarter of newly diagnosed people (24%) were homeless—the highest level ever.

These new cases bring the estimated number of San Francisco residents living with diagnosed HIV to 15,631 at the end of 2021. More than 90% are cisgender men, compared with 76% nationwide. Transgender women make up a larger share of people with HIV in San Francisco compared with the country as a whole (3% versus 1%), while cisgender women account for a far smaller proportion (6% versus 23%).

More than half of San Franciscans known to be living with HIV are white (57%), about double their proportion nationwide (29%). Conversely, Black people accounted for just 12% of cases in San Francisco, compared with 40% nationwide.

The number of deaths among people with HIV rose to 286 in 2020 (the last year with complete data), continuing an upward trend since 2016. While the number of HIV-associated deaths is still on the decline, accidental deaths—which include deaths resulting from drug overdose—are rising.

In 2020, nearly three quarters of deaths among HIV-positive people were due to non-HIV-related causes. Looking at the 2017 to 2020 time period, 29% of deaths were HIV-related, but accidents overtook non-AIDS cancers as the second leading cause of death. Drug overdoses were responsible for 15% of deaths during this period. But deaths due to advanced liver disease declined sharply, likely thanks to effective new hepatitis C treatment.

“The increased death rate we’re seeing is of great concern, and we really need to focus on overdose deaths,” said Susan Buchbinder, MD, director of SF DPH’s Bridge HIV. “We still need to work on getting the number of HIV-associated deaths down, but we also need to look at other causes. It’s really about whole-person care.”

Despite COVID disruptions, HIV care indicators are generally holding up. The report shows an improvement in linkage to care for newly diagnosed people, a high rate of antiretroviral treatment and increased pre-exposure prophylaxis (PrEP) use, but viral suppression hasn’t caught up to pre-pandemic levels.

This year’s annual report includes an expanded section on PrEP. Among HIV-negative men who have sex with men seen at San Francisco City Clinic, PrEP use increased each year from 2014 to 2021. PrEP use in 2021 was high and stable for white, Latino and Asian gay and bi men (69%, 70% and 71%, respectively) but lagged for Black men (57%). Despite COVID disruptions, the 2020 and 2021 figures are similar and higher than the 2019 numbers for all racial/ethnic groups.

Data from the San Francisco AIDS Foundation (SFAF) and community-based organizations serving people of color or youth show that many people eligible for PrEP never start using it, and an even smaller proportion are still taking it six months later. Among priority population clients enrolled in the SFAF PrEP program in 2020, 80% opted for daily PrEP pills, while 19% used on-demand PrEP before and after sex. So far, few people in San Francisco are using long-acting injectable cabotegravir (Apretude) for HIV prevention.

Regardless of the regimen, PrEP uptake among women and people who use drugs has been low, according to Buchbinder. “We really need to make it clear to people and have them be knowledgeable about PrEP,” she said. “People think of it as something for men who have sex with men, but it works very well for women.” 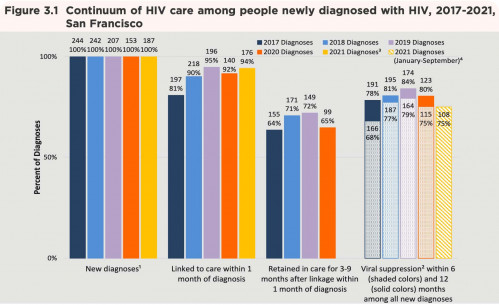 Most people newly diagnosed with HIV in 2021 (94%) entered care within one month, approaching the pre-COVID level, and most of those started antiretroviral treatment. What’s more, the time from diagnosis to treatment initiation continues to shorten, with a majority starting antiretrovirals on the day they’re diagnosed. But the proportion of people who achieved viral suppression within six months fell to 75%, down from 79% of those diagnosed in 2019.

Here, too, disparities persist. Overall, 72% of San Francisco residents living with HIV had an undetectable viral load according to their most recent test in 2021, but viral suppression rates were lower for Black people (68%), women (66%) and people who inject drugs (64%). People experiencing homelessness were least likely to have an undetectable viral load, at just 27%.

“It is welcome news that more people are able to access lifesaving HIV testing and are being linked to care,” San Francisco health director Grant Colfax, MD, said in a statement. “However, we are seeing health disparities among BIPOC [Black, Indigenous and people of color] communities and people experiencing homelessness that are deeply concerning. We must continue to focus our efforts on delivering services and outreach to people most affected through collaborations with community groups in providing low-barrier, stigma-free approaches to care.”