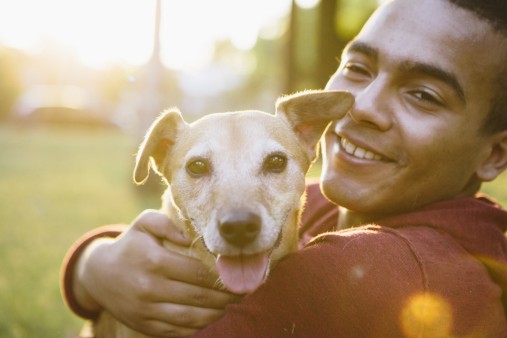 Why Schools Should Offer College Students Downtime With Therapy Dogs

Trained dogs can help university students chill out during periods of heightened stress.

College can sometimes put an emotional and mental strain on young adults. But therapy dogs can help reduce pressure and anxiety and increase feelings of happiness and can offer other benefits to undergrads, suggest new study findings published in Stress and Health, reports The University of British Columbia.

For the study, researchers at the University of British Columbia (UBC) surveyed 246 students before and after they spent time with therapy dogs at a drop-in center, where students were able to pet, cuddle and chat with seven to 12 canine companions. Scientists required participants to complete questionnaires immediately before and after each session and again about 10 hours later.

Findings showed that students who interacted with therapy dogs experienced a significant decrease in stress and an increase in happiness and energy immediately following the session. Although this happiness didn’t last, 10 hours later, students who had spent time with the dogs reported feeling less negative in general and more supported than those who hadn’t visited with the canines.

In addition, researchers challenged a previous study that suggested that female students were more likely to benefit from therapy dog sessions than their male counterparts. The findings of this study showed that the sexes benefited equally from these sessions.

According to Frances Chen, PhD, an assistant professor of psychology at UBC and the study’s senior author, “These sessions clearly provide benefits for students in the short-term, so we think universities should try to schedule them during particularly stressful times, such as around exam periods.”

Click here to learn how pets can improve kids’ health.