What you place between two slices of bread can pack a powerful nutritional punch. 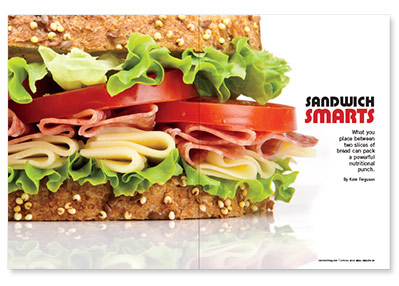 History has it that the first description of what seems to be a sandwich dates back to the first century B.C. when a Jewish rabbi named Hillel the Elder established the Passover tradition of using two pieces of unleavened bread (matzo) to hold a filling of lamb, mixed nuts and bitter herbs. In the Middle Ages, poor people used thick slices of stale bread to double as plates on which they placed cooked meats and vegetables. And in the 17th century, Dutch tavern keepers would slice pieces of cured beef hanging from their establishment’s ceiling and lay them on buttered bread for their hungry customers.

Similar sandwiches soon began surfacing in other parts of Europe. In England, the sandwich took its name from John Montague, the fourth Earl of Sandwich. He was an 18th century nobleman who ordered his meat-only meals placed between two pieces of bread. That way, he could eat and play cards without soiling the deck with his greasy fingers. According to legend, so intrigued were his fellow players, that they took to ordering “the same as Sandwich.”

These stories may just be colorful myths. But one thing we know for sure is true: Sandwiches did become a popular staple all over the world, and today these quickly prepared meals remain a favorite of many people everywhere.

From pop-in-your-mouth miniature to he-man hefty, sandwiches come in all different sizes and shapes, and they can be made of countless different foods to create a variety of tastes ranging from savory to sweet and everything in between. But to make one a healthy meal, “aim for a sandwich that is around 400 to 500 calories, fiber-rich and loaded with veggies,” says registered dietitian Elizabeth Ward, who offers a simple four-step plan—outlined below—to do just that.

Build your sandwich on healthy whole grain breads.
Whether it’s a roll, a wrap or a pita, breads made of whole grains are full of fiber. Fiber helps you feel full longer, so that means you’ll be less likely to get hungry and start looking for something else to eat.

According to the American Cancer Institute for Cancer Research, whole grains contain antioxidants, phenols, lignans and saponins. Researchers have linked these substances to a lower cancer risk. For a bread to be considered whole grain, all three parts of the grain must be present: the germ, the endosperm and the bran. In addition, whole grains also reduce the risk of metabolic syndrome, a strong predictor of type 2 diabetes and cardiovascular disease.

Of course, sandwich lovers may not care about all of these health benefits—they might just like the deliciously nutty taste of many whole grain breads.

Pick a protein.
Reach for lean 3-ounce servings of low-calorie and low-fat proteins, such as turkey, tuna, chicken or salmon. If you’re a vegetarian, many plant sources offer quality protein. At the top of the list are beans, such as pinto, garbanzo, white, kidney, lima and soy beans. Plus, these protein-packed choices taste delicious. Try pureeing them into tasty spreads, then layer them onto whole grain bread dressed with any number of other scrumptious vegetables, either raw or cooked.

Additional plant sources of protein include asparagus, cauliflower, broccoli, brussels sprouts, artichoke, spinach and watercress. Soy beans in the form of tofu is also a great protein source. Tofu’s densely packed white curds can be seasoned and stir-fried with other vegetables, and with a little soy sauce, it can make a tasty and satisfying sandwich filling. Also, don’t overlook thick, meaty portobello mushrooms. These tasty fungi make great faux burgers, or “meat” strips if sautéed in a little oil or butter and ladled over veggies.

Add more veggies.
Tomatoes, romaine lettuce, spinach, cucumbers, onions (try cooking them in a little spiced vinegar for lots of tangy taste) and a host of many other vegetables can create a luscious sandwich filling. Roasted veggies, in particular, can boost the flavor and nutritional content of almost any sandwich.

Layer on a spread.
With a food processor, or blender, there’s no limit to what kind of spreads you can make to dress your chosen sandwich. Ditch full-fat mayonnaise for well-seasoned pureed veggies drizzled with a little oil, and mix to a paste-like consistency. If you don’t feel like being in the kitchen, you can always buy any number of veggie-based spreads, such as tapenades and salsas.

If you’re short on time, there are also ways to make fast-food sandwich choices easier. At Subway, you can find a few 6-inch submarine sandwiches that have fewer than 6 grams of fat. You can always “stack the sandwich with all the vegetables that look good to you—olives, onions, lettuce, tomato and green peppers,” writes registered dietitian Susan M. Kleiner, PhD, and Jeff O’Connell, authors of the book Powerfood Nutrition Plan. “Choose a fat-free condiment like honey-mustard sauce instead of mayonnaise.”

Have a little extra time? Buy whole grain bread and check your refrigerator for leftover pieces of meat or cooked veggies and cheese. Basically, whatever you have on hand can work to make a world-class sandwich meal. On the face of the bread, layer on a healthy spread of your heart’s desire. Slice or chop off pieces of the meat then layer on thin slices of a cheese you like. Garnish with veggies and wrap the sandwich in aluminum foil. Pop it into the oven until the cheese melts, or if you’re in a hurry wrap the sandwich in a paper towel and place it in the microwave. This satisfying sandwich can be for breakfast, lunch or dinner.

Interestingly, although there are many variations of this timeless classic, a Boston court ruled in 2006 that it must include at least two slices of bread to earn the name “sandwich.” This means as tasty as they may be, wraps, rotis, falafels and tacos don’t cut the mustard. Sandwich sticklers have even raised eyebrows if fillings are not placed between two separate pieces of sliced bread. That means, rolls, bagels and croissants are also out of order. What about triple-decker sandwiches? Well, for those who go strictly by the book, three slices of bread is, perhaps, just too much of a good thing.

Then, there’s the question about whether a sandwich is considered a snack or a meal. Many people say this depends on the size of the sandwich and what’s inside it. Some folks argue that little sandwiches with just a teeny bit of filling can be classified as a snack, but, generally, if a sandwich is made with two average-sized slices of bread with a hefty amount of filling, it should be considered a meal.

To avoid getting caught up in the quandary, RH prefers to look at the issue this way: Sandwiches are versatile enough to be both a snack and a meal. After all, people eat them for breakfast, lunch or dinner, or in between any of these main meals.

And lest we forget, sandwiches also make great desserts, too. Who says that what goes between those two slices of bread can’t be mouthwateringly sweet? A visit to FoodNetwork.com introduced us to the recipe for a crunchy fried peanut butter and jelly sandwich. One look at that recipe told the whole story: This was not the kid’s sandwich you commonly visualize when you hear the name. When was the last time you ate a PB&J sandwich slathered with peanut butter and raspberry jam, layered with potato chips, dipped in egg batter, dredged in crushed cinnamon cereal and then fried? Or go global and try a loti—fluffy multi-colored bread slices that are perfect as cushions on which to rest scoops of sweet, milky ice cream.

Really, a great-tasting sandwich that suits your particular fancy can be so much more than a portable meal. What’s key is that you walk into your kitchen unafraid and ready to try unusual food combinations. All that’s required is for you to have a sense of adventure and daring coupled with a real love of food. Besides that, just keep the recipe strictly legal and make sure your filling rests securely between two slices of bread. 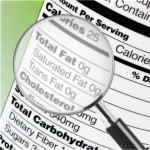