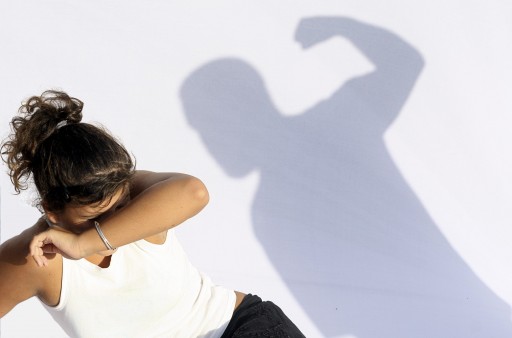 Madeline McCray is an earthy, lively woman with an easy way about her. Before you realize it, you’re drawn into the warmth that surrounds her. But years ago, McCray was married to a man who was unable to respond to that warmth. “He tried to love me,” she says, “but didn’t know how to without being violent.”

Like many men who inflict violence on their intimate partners, McCray’s former husband was “a man who’d confused love’s passion with possession, and replaced its splendid beauty with ugly obsession,” she continues. “He was a man who tried to erase his own pain through my pain, which he caused. All his good intentions were wrapped inside dysfunction and an uncontrollable rage that lived inside him long before we ever met.”

That man is the father of her two sons and a stepdaughter. He’s also someone’s son, brother, uncle, friend or co-worker. In other words, he could be any man.

“It started out as many domestic violence situations do, with the pushing, shoving, controlling, or the attempt to control, what I knew and who I talked to,” McCray recalls. “Then it escalated into something more physical.”

When her first son was 18 months old, McCray prepared mentally to leave her husband. “But I knew I had to be careful how I did that,” she says.She left after having her second son.

The statistics support McCray’s caution. According to the National Coalition Against Domestic Violence, a woman is assaulted or beaten every 9 seconds in the United States, and 1 in 3 women have been victims of physical violence by an intimate partner. And although there are women who physically abuse their partners, the reported instances of domestic violence women and girls suffer at the hands of men overshadow these types of assaults.

When McCray picked herself up from the floor, bruised and battered, her lip split and her eyes swollen shut, she was transformed inside. “I had grown,” she says. “And I was, from that day forward, changed.”

Eventually, McCray’s resolve led her to team with an old friend, Terrie M. Williams, a mental health advocate and activist, and author of the book Black Pain: It Just Looks Like We’re Not Hurting. “Terrie and I co-founded the initiative to bring together the issues that have to do with mental health, as well as their connection to domestic abuse and child abuse,” McCray explains. “I’m motivated to do this kind of awareness work because of my own experience with domestic abuse many years ago.”

McCray stresses the need for men to help redefine what it means to be a “real man” in our society. “It’s certainly not an easy conversation,” McCray says. “It’s getting better, but, let’s face it, we live in a patriarchal society, and men have been taught to treat women as second-class citizens. These behaviors are passed down to young boys.”

McCray is grateful for men such as Brown and Ted Bunch, the co-founder of A Call to Men, a leading national violence prevention organization that offers training and education to men, boys and communities. These men challenge notions of male superiority and female subordination. “As we increase and promote a healthy and respectful manhood that values women and girls, we also decrease and prevent domestic violence, sexual assault, homo-phobia and bullying,” Bunch says.

Organizations like Bunch’s teach men to redefine manhood and call on them to act when “certain things people say diminish the value of girls and women,” McCray says.

“For example, men may hear expressions such as, ‘You hit like a girl; you throw like a girl; you run like a girl,’” she explains. “This implies that everything a girl does is less than. Obviously, if a man is told everything he does is superior in every way and a girl’s performance is inferior, then it stands to reason this is why men are conditioned to believe they should take control, their opinions are more valid, and they make better decisions than a woman and a girl.”

Another focus of such organizations is “getting our men involved to see the ways in which they’ve been taught to ignore their own pain,” McCray says. “This is very crucial because when men are boys, they’re taught that boys don’t cry.... They’re expected to bottle up their feelings and emotions rather than taught to understand that both girls and boys and men and women are human beings, and we all experience fear and pain, and that you can cry if something hurts you.”

When Kenton Bell, now a graduate student at the University of Wollongong in Australia, studied sociology and anthropology at the University of North Carolina, Asheville, he learned about the type of gendered violence and male-female power dynamics McCray describes. His interest in these issues inspired him to sign up as a volunteer at Helpmate, a domestic violence shelter and outreach agency in Buncombe County, North Carolina.

Jeffrey Gardere, PhD, a noted psychologist and media personality who was a speaker at the NLL event, says “ending domestic violence is incomplete if we do not also analyze and treat the perpetrators, many who were once witnesses and victims of domestic violence themselves.”

Bell agrees with this viewpoint. “You can’t effectively stop men’s violence without directly engaging with men,” he says.

Bell saw firsthand how male participation at a domestic violence shelter could offer positive support to women. At first, he faced skeptical staff and clients. “Initially, there was some hesitance about the presence of a male volunteer working in a women’s shelter,” he says. But, eventually, both female staffers and women coming to the shelter for help grew to trust Bell, who they’d see working odd jobs, doing intake at the front desk and safely ferrying clients to and from court.

Bell says staffers “thought it was important to have a nonviolent man greet the women and children” seeking safety at the shelter.

Still, Bell recognizes that given social conditioning and norms about gender roles, more male participation in domestic violence awareness will come with complications. “Women have long struggled to have their voices heard in general, and men coming into the movement against domestic violence can silence women’s voices and seemingly take over,” he says. “Men can do this quite unintentionally, as men are socialized to speak up more, and they have much more social and cultural capital.”

McCray believes men should challenge and correct negative perceptions about women and the inappropriate behavior that shapes these attitudes and supports the culture of domestic violence. “We’re trying to encourage men to stand up,” McCray says. “When the domestic violence story about football star Ray Rice and his wife, Janay, blew up, James Brown spoke passionately about violence against women and girls. His willingness to do that influenced others.”

Of course, not everyone has Brown’s ability to reach millions. “I understand that, but there has to be a willingness on the part of men to change the way in which they think of their own manhood,” McCray says. “By changing and promoting what it means to be a healthy man, you’re automatically going to change your behavior toward women.”

Today, McCray is married to actor Jerry Matz, “a gentle spirit,” she says. “We spend our time laughing, performing and enjoying life.”

Many relationships involving domestic violence are complicated. “My former husband wasn’t a monster; he was a very loving, affectionate father,” McCray says. “Imagine if there had been a man in his life to encourage him to seek help, so he could rise to his higher self. We might have thrived as a family.”