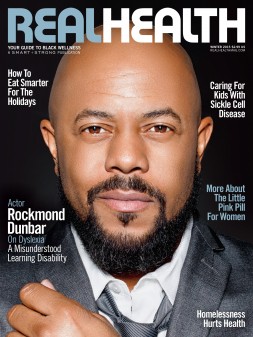 Dyslexia is described as a learning disability, but this definition adds to misunderstandings about the condition. 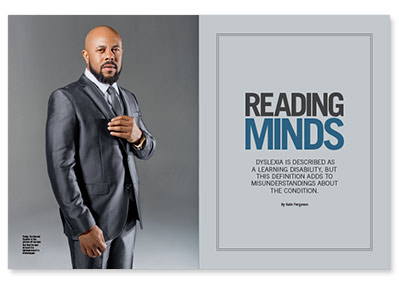 The first time Rockmond Dunbar heard about dyslexia, he was a freshman at Morehouse College. He’d landed a role in a play called Blue Vein Society, and he and other cast members were doing a read-through of the script. Suddenly, his theater coach stopped the reading and focused on him. She asked him if he had dyslexia. Dunbar says he didn’t know what to say because, at the time, he had no idea what this common learning disability was.

“It was very embarrassing,” Dunbar says. “You know, you’ve got cute girls in the class; I don’t know what dyslexia is and she’s calling me out in front of the class.” To save face, all Dunbar could think to do was say, “No, I don’t have dyslexia.”
Dunbar’s seemingly insensitive acting coach explained to him that his reading reminded her of the way her son, who had dyslexia, read, so she suggested he get tested. Without his coach’s suggestion, Dunbar’s dyslexia might have gone unnoticed for many more years.

“For some people, their dyslexia is identified early in their lives, but for others, their dyslexia goes unidentified until they get older,” says the International Dyslexia Association (IDA), an advocacy group composed of professionals who partner with people who have this learning disability and their families.

After Dunbar recovered from his embarrassment, his curiosity drove him to Morehouse’s office of student and academic affairs. There he asked to be tested for dyslexia. “About a month later, I found out that I was a classic dyslexic,” Dunbar says. “It was devastating because, at that time, I didn’t know too much about learning disabilities. I felt I was duped in some way, like something was off, like I wasn’t taken care of when I was younger.”

Often dyslexia slips by unnoticed because those with the disability can be very bright and “gifted in areas that don’t require strong language skills, such as art, computer science, design, drama, electronics, math, mechanics, music, physics, sales and sports,” says the IDA.

Interestingly, when Dunbar took the test, his IQ scores were above average, which is the case for many people who have dyslexia. The test Dunbar took was given by Landmark College, the first institution of higher education to pioneer a college-level curriculum for students with dyslexia.

“After I was diagnosed, I got the opportunity to study that summer at Landmark College,” Dunbar says. There he learned more about dyslexia and how his brain works to process language. “I’m a kinesthetic learner,” Dunbar explains. “I’m tactile; I need to touch and feel and maybe be emotional about whatever I’m putting into my brain. Without learning these things, I’d have to say I don’t think that I would be a decent actor.”

Dunbar’s speculation is echoed by experts such as Sheldon H. Horowitz, EdD, director of learning disabilities resources at the National Center for Learning Disabilities. According to Horowitz, dyslexia affects not only someone’s ability to learn to read and how they learn to read, but also their ability to recognize words at a glance and sound them out. “So even if a person with dyslexia learns how to read, the rate of reading and the fluency with which he or she reads are going to be somewhat slow,” he says. “Think about it: If you’re in a college class and you need to read a hundred pages each night, that’s going to be tough for you. Your fluency will be slower, and the extent to which you can grab information and run through it will be definitely delayed. People with dyslexia struggle with vocabulary, and they struggle with reading comprehension.”

In addition, while dyslexia specifically affects reading, the condition influences the ability to process information in many other areas. “You don’t necessarily associate math and reading, but kids have to do math word problems,” Horowitz says. “There’s math and reading and note-taking and summarizing and graphing and charting, so individuals with dyslexia are often not just challenged in the area of reading but in how reading affects their abilities to do other kinds of things, such as going shopping, reading a label, picking out the ingredients for a recipe, or filling out a college application and reading between the lines about what they’re really asking you to write about in your essay. Dyslexia is a lot of different things as it evolves over the course of the lifetime of the reader.”

But these difficulties don’t reflect on the intelligence of someone who has dyslexia, Horowitz stresses regarding one of many misconceptions that make this learning disability so misunderstood. In school settings, people with dyslexia face many challenges besides their struggle with language skills. The competitiveness inherent in academic environments can trigger frustration in someone who has dyslexia, and this can chip away at a person’s self-esteem. “This can impact a person’s sense of how much they can achieve,” Horowitz explains. “Also, this can cause teachers to have lower expectations for that student, given that he or she is a poor or slow reader. This is very bad because the student might have the knowledge but just can’t express information given the transition readers must make between printed text and oral reading.”

Another misconception about dyslexia is that those who have this learning disability also have behavioral problems. “There’s no scientific evidence that people with dyslexia have behavioral disorders,” Horowitz stresses. But “there’s a much higher incidence of attention deficit disorder in those kids than in the general population, so there’s an overlap.”

According to Horowitz, children with dyslexia may be very inattentive because they’re not following along with what’s going on in class. “So they’ll create a distraction, such as knocking over their desk, or they’ll do something to get disciplined to avoid having to read,” Horowitz says. “This is a way they can avoid being embarrassed. But there is no direct correlation between behavior problems and dyslexia.”

Of course, stigmatizing stereotypes about dyslexia can be dispelled with education and awareness. This is why 15 nonprofit organizations teamed to create Understood.org, an advocacy group that offers support to millions of parents whose children struggle not only with dyslexia, but other learning and attention issues. Dunbar is a spokesperson for the organization, which launched a public service advertising campaign last year in partnership with the Ad Council.

If parents and kids log onto the site, they’ll find information to help them find out whether they have any type of learning or attention issues. And if they do, the site can connect them with people who “are of a like mind and circumstances, so they don’t feel alone,” Dunbar says.

“I wonder what it would have been like if I knew I had a learning issue when I was younger,” he continues. “If there would have been a website like Understood.org that I could go to just to ask questions and be heard and supported, I think I would be in a much better position now.”

But there’s something else Dunbar considers when he thinks about educating people about dyslexia. “What we’re trying to do now is drop the word ‘disability,’ because dyslexia isn’t really a disability,” he says. “How we use the word ‘disability’ is hindering and it doesn’t fit.”

Experts may or may not agree with Dunbar, but there are those who prefer dyslexia be viewed as simply a different way some people’s brains learn and process information. Some others prefer dyslexia be called “a gift.” After all, many famous people who had dyslexia, such as Steve Jobs, Albert Einstein, Leonardo da Vinci, Pablo Picasso and Thomas Edison, were considered geniuses.