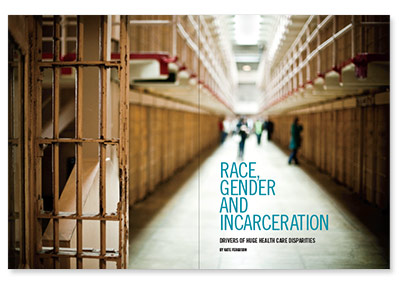 Click here to read a digital edition of this article.
In May 8, 1973, New York’s Governor Nelson Rockefeller pushed through a series of strict anti-drug laws, among the nation’s most severe. These “Rockefeller Laws” were punitive measures that established mandatory prison terms for possession of even small quantities of a controlled substance; specifically, they called for judges to impose a sentence of 15 years to life on anyone convicted of selling 2 ounces of a narcotic drug or possessing 4 ounces of cocaine or heroin. These extreme measures did not yield the desired result: to dissuade people from selling or using drugs. Instead, they sent countless black men to prison. The harsh sentences under these laws ripped fathers from their families and reduced their opportunities for economic success because of boosted unemployment rates.

In addition, the laws also traumatized young children who suddenly faced poverty and dislocation, and the legislation created unsafe neighborhoods because of prisoners’ constant removal and return to their communities. What’s more, incarceration also restricted the social and political rights of African-American men and fueled their lack of access to health care, treatment and prevention. Although the Rockefeller Laws were reformed in 2009, the so-called “war on drugs” rages on and continues to send minority populations to prison.

But men aren’t the only ones put behind bars. During the 1980s, a barrage of women entered the prison system after the illegal drug industry introduced crack cocaine to Americans. The highly addictive drug was cheap and easily accessible, especially in low-income areas. Many female addicts fed their craving by stealing, engaging in prostitution and distributing drugs. In October 1986, to bolster the war on drugs, President Ronald Reagan signed the Anti-Drug Abuse Act. It mandated harsher sentences for those arrested for crack possession, filling the jails with low-income women and men. In fact, from 1977 to 2007, the female prison population grew by 832 percent—double that of men, according to the Institute on Women & Criminal Justice. Although the crack-cocaine epidemic has abated, two-thirds of women in prison were there for nonviolent offenses, many of them drug-related crimes.

Nine years ago, Waheedah Shabazz-El, a Philadelphia postal worker, found herself on the bad side of a drug bust on her home. The drugs she indulged in were mostly marijuana and crack cocaine, but she also dabbled in the more expensive powdered stuff. “Back in the day, my house was the party place,” Shabazz-El said in a POZ magazine interview. “There were always a lot of people, music, drugs and alcohol at any time of the day or night.” The party ended for her that day in 2003 when police officers raided her home and arrested everyone there. They charged Shabazz-El with drug possession and intent to distribute a controlled substance. She got six months at the Cambria Correctional Center and was sentenced five years of probation.

While in jail, Shabazz-El was also diagnosed HIV positive. She got the news during a routine test at the correctional facility while sitting in an open room with a large window and no curtains. Totally uneducated about HIV/AIDS, she had never been tested for the virus before.

From the available data, many experts conclude that most HIV-positive prisoners probably contract the virus before doing time. In addition, much like the general population, many prisoners also may not know if they are infected with HIV. (The CDC estimates that of the 1.1 million Americans living with HIV, 20 percent of them are not aware of their status.) And although blacks represent about 14 percent of the U.S. population, they account for nearly half (44 percent) of new infections.

Incarceration contributes to African Americans’ HIV risk in a number of ways, and it can also affect treatment outcomes. Mounting data show that people in prison are at high risk of many different health issues. For example, incarcerated populations exhibit many of the risky behaviors associated with HIV. These behaviors include drug use, bartering sex for money or drugs, and having multiple sex partners and chronic sexually transmitted infections. What’s more, many prisoners are mentally ill and have histories of sexual abuse and assault. Those who are injection drug users are at high risk of contracting not only HIV but also the hepatitis C virus.

In 2010, of the 8.4 percent of women who made up the total inmate population (up from 7.7 percent in 1996), female inmates were more likely to have a substance use disorder than male inmates (66.1 percent versus 64.3 percent), according to a report by The National Center on Addiction and Substance Abuse at Columbia University.

People who are dealing with unaddressed addiction and mental health issues that cause them to engage in criminal behavior typically come into the criminal justice system very ill, says Tracie M. Gardner, the director of New York State policy at the Legal Action Center in New York City. “For many, the care they receive in the correctional setting is their first time encountering comprehensive health care.”

Most experts agree that drug addiction is a risk factor for both serving time in prison and acquiring or transmitting HIV. That’s why the correctional system holds so many untreated addicts, and why many of them learn of their HIV status while behind bars. If both the addiction and the HIV are not treated during incarceration, the prisoners’ health will continue to deteriorate—and affect the larger community.

For example, if prisoners don’t treat their HIV and then don’t connect to health care providers once they’re released, then they will not lower the amount of virus in their bodies and they’ll be more likely to pass HIV along to someone else. And of course, if you don’t treat your addictions, you’ll not be able to take care of your health or take your HIV meds. It’s becoming very obvious, Gardner says, that drug and incarceration policies that churn huge numbers of people back and forth out of their communities and in and out of correctional facilities are also major drivers of health disparities in those communities.

The reality is that state programs for drug addiction treatment and rehabilitation are scarce and underfunded. For those people who remain untreated, prison is often a revolving door. Once on the outside, they relapse under the familiar pressures and then end up behind bars again.

But solving the problem is not just a matter of offering treatment for drug addiction. Facilities have to offer the right kind of treatment.

In 2009, Human Rights Watch reported that, in New York state prisons, addiction programs were filled to capacity and prisoners faced long waiting lists for treatment. In addition, said the report, “despite the overwhelming evidence that medication-assisted therapy is the most effective treatment for opioid dependence, the majority of New York state prisoners dependent on heroin or other opioids have no access to methadone or buprenorphine”—two meds that help with withdrawal symptoms.

“There is enormous stigma and prejudice against methadone in the criminal justice system because there is a belief that you need to be clean and not have any substances in your body when you’ve got addiction issues,” Gardner explains. “They don’t understand it, or they have ideas about people on methadone and don’t believe that it’s a necessary treatment. This is medication, so it’s no more than to deny people insulin. Methadone can be lifesaving in terms of inhibiting the condition in which someone would be tempted to relapse.”

Gardner’s assertion is supported by the Global Commission on Drug Policies. The commission confirmed that methadone and buprenorphine, or “bupe,” treatment are “more effective in attracting and retaining heroin dependent people than any other forms of treatment.” What’s more, according to the commission, these treatments are also safe and inexpensive and result in a reduction in deaths, HIV infection, crime and drug use.

Both bupe and methadone treatments are considered examples of harm reduction. This treatment approach attempts to directly reduce harm from drug use without necessarily reducing the consumption of the controlled substances.
Increasingly, experts are challenging the way the criminal justice system treats prisoners’ drug addictions. “It is beyond dispute that the imposition of harsh criminal penalties is the wrong paradigm for addressing the problems related to drug use,” said Socheatta Meng, the legislative counsel for the New York Civil Liberties Union, in a statement about the state of drug policy and addiction in New York City and the Rockefeller Drug Laws reform. “A new and more effective model based on a public health framework is a better course of action.”

That public health model is based on addiction prevention and treatment, a focus on public safety and harm reduction methods like the ones previously mentioned. As Meng sums it up, community-based treatment and rehabilitation programs cost much less than incarcerating people. What’s more, they effectively treat addiction and have the potential to reduce drug use and crime, decrease overdose deaths and lower the infection rates for HIV and hepatitis.

The Summer 2013 issue of Real Health will focus on the effects of prison on women’s health.