A detail from a “PrEP Supports” campaign ad Courtesy of SFDPH

An HIV prevention campaign in San Francisco titled “PrEP Supports” hopes to increase the number of African-American men taking the once-daily pill Truvada as PrEP, or pre-exposure prophylaxis, according to a press release from the San Francisco Department of Public Health, which launched the initiative last week.

The city has made major headway toward its “Getting to Zero” HIV goals (zero new infections, zero HIV deaths and zero stigma). In fact, new diagnoses dropped to a record low of 223 in 2016. But the success hasn’t been shared equally among all populations at risk for the virus. 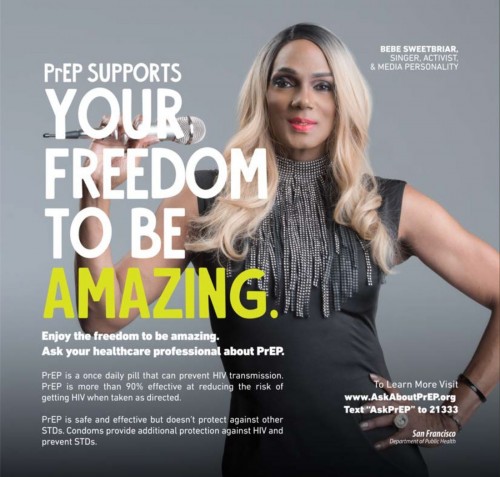 An example from the “PrEP Supports” CampaignCourtesy of SFDPH

“African-American men have the highest HIV diagnosis rate among all groups in San Francisco,” Barbara Garcia, MPA, the city’s director of health, said in the press release. “While the rate is declining, we need to do a better job of reaching the African-American community with tailored prevention messages and information. PrEP is a medication that prevents HIV and saves lives.”

The new campaign, which will appear on buses, billboards and Bay Area Rapid Transit (BART) stations, highlights real people and is the product of research conducted by the brand development firm 510media, which is based in Oakland and reached out to the local Black community for feedback. Additionally, the website AskAboutPrEP.org offers resources, inspiring profiles and information on accessing PrEP.

As POZ explains in the PrEP section of our HIV Basics, scientists estimate that when Truvada is taken daily, it reduces the risk of contracting HIV by 99 percent or more among men who have sex with men (MSM) and 90 percent or more among women. (The risk reduction for women may very well be greater than 90 percent, but there isn’t sufficient research available to refine the estimate. For more on that, click here.)

An example from the “PrEP Supports” CampaignCourtesy of SFDPH