The founder and CEO of The Balm in Gilead on opening congregations to people living with HIV.

Twitter
Facebook
Pinterest
Tumblr
Email
Advertisement
This week in Harlem, The Balm In Gilead is celebrating 25 years of the Harlem Week of Prayer for the Healing of AIDS. Wow! New York City was trapped in the dark ages of AIDS 25 years ago. There was no light. Our family and friends were dying and there seemed to be no stopping of suffering, pain and grief.

A little idea was planted in my spirit to mobilize the faith community of Harlem to address HIV. Working at Harlem Hospital, I grieved everyday as I watched patient after patient die alone from AIDS. No clergy. No family. No friend. Those were the dark days of AIDS.

The Harlem Week of Prayer evolved into the Black Church Week of Prayer for the Healing of AIDS, mobilizing African American congregations across the nation to open their doors and minds to persons living with HIV and to become a center for HIV prevention, advocacy and care.

In 2010, the week of prayer, once again, evolved into The National Week of Prayer for the Healing of AIDS, calling forth all faiths across our nation, regardless of race, creed or color, to join us in praying for the healing of AIDS in the United States.

Most importantly, the mobilization of Harlem’s faith community gave birth to The Balm In Gilead, Inc., an international organization known throughout the world for its insightful understanding of religious cultures and values and extraordinary ability to build strong, trusted partnerships within faith communities to address HIV and other life threatening disease, such as hepatitis C, and cervical cancer.

As a pioneer in the mobilization and capacity development of faith communities to fight HIV and other health disparities, there are so many lessons learned. Reaching over 7 million African Americans annually through their faith institutions with life-saving HIV information causes my mind to race through a barrage of thoughts that I would like to discuss.

Topics such as the horrendous, senseless death and sickness African Americans and Africans suffer each day due to health disparities and heath care; the urgent need to exercise our right to vote in all elections; and the curse of stigma, fear and ignorance that continue to engulf still far too many faith communities as it relates to HIV; sexual violence and gender bias. However, on this occasion, the most important topic is "Thank you!"

Twenty-five years of praying of the healing of AIDS could not have happened without those faith leaders in Harlem (and across the United States of America) agreeing to confront their own fears and misunderstandings about HIV and persons living with HIV.

For those who love unconditionally—even when it is hard—Thank You! To the children who are coming behind us—Thank You for taking our left overs and making something great out of it! To God be all the glory!
Pernessa C. Seele is founder and CEO of The Balm in Gilead, Inc., a nonprofit, nongovernmental organization whose mission is to prevent diseases and to improve the health status of individuals who are disproportionately affected by high rates of health disparities, especially HIV, hepatitis C, cervical cancer and sexual violence. A licensed minister, Seele received a Bachelor of Science and a Master of Science from Clark Atlanta University in 1976 and 1979, respectively, and a Doctorate of Humane Letters from the College of New Rochelle in New York in 2007. She is a native of Lincolnville, South Carolina. 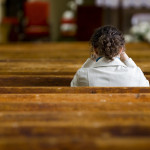 For a couple who are of different faiths, how should they decide what religion to raise their children in?