Black adults ages 45 and older are more likely to suffer large-joint aches and pains from osteoarthritis than their white counterparts, according to a new study published in Arthritis & Rheumatism and reported in the journal’s press release.

In the United States, more than 27 million adults, ages 25 and older, have osteoarthritis, according to the U.S. National Institute of Arthritis and Musculoskeletal and Skin Diseases. The common painful and sometimes crippling degenerative disease is caused by cartilage loss in joints. Why? Because when cartilage tissue erodes, bones rub together and that causes pain, swelling and stiffness that can impair movement.

For the study, researchers from the Thurston Arthritis Research Center at the University of North Carolina at Chapel Hill evaluated a group of 2,121 black and white men and women ages 45 and older. As part of the study, scientists administered two home interviews and one clinic visit with a physical examination and radiographs to each patient in the Johnston County Osteoarthritis Project.

When researchers compared black and white study participants, adjusting for age, gender and height-to-weight ratios (BMI), scientists found that African Americans were twice as likely to have osteoarthritis of the knee and were 77 percent more likely to suffer from spine and knee osteoarthritis at the same time. But there was good news. Findings showed black participants were significantly less likely to have arthritis in hand or fingertip joints alone.

“Our findings suggest a substantial health burden of large-joint osteoarthritis, particularly hip and spine, among African Americans, and further studies that address this concern are warranted,” said Amanda Nelson, MD, of the Thurston Arthritis Research Center.

In addition, racial differences were more significant than gender in predicting who gets osteoarthritis, Nelson added.

Black seniors have other concerns besides arthritis. Click here to read about a community-based program that helped older African Americans suffering from depression.

And click here to read the U.S. National Library of Medicine’s page on osteoarthritis treatment and symptoms. 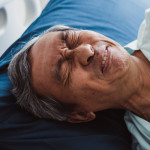