New York City plans to close four sexually transmitted infection (STI) clinics on Mondays to cut costs, DNAinfo.com reports. As a result, the STI clinics in Chelsea, Harlem, Fort Greene and Jamaica will increase their service by three hours on Saturdays. An STI clinic in Morrisania will close on Saturdays. The city claims the cuts will save $600,000. Clinic employees and union officials are concerned that the cuts would affect their efforts against HIV and multidrug resistant gonorrhea, as well as their ability to give vaccinations against meningitis. Because of an outbreak, the vaccine has been recommended in the city for all sexually active men who have sex with. 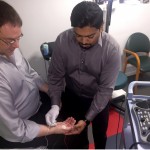 NY Hospitals Struggle to Vaccinate Newborns Against Hep B