Thanks in part to healthier lifestyles and investment in research that has yielded new treatments, cancer incidence (new cases) and mortality rates have fallen in recent decades. But the overall growth—and aging—of the United States and global populations contribute to a rising total number of people diagnosed with cancer as well as an increase in the number of survivors.

These are among the findings described in the American Association for Cancer Research’s newly released AACR Cancer Progress Report 2019.

“Research continues to be our best defense against cancer. It powers the development of new and better ways to prevent, detect, diagnose, treat and cure some of the many diseases we call cancer,” said AACR president Elaine Mardis, PhD. “These advances are driving down overall U.S. cancer incidence and death rates and increasing the number of children and adults who are living longer, higher-quality lives after receiving a cancer diagnosis.”

According to the report, the age-adjusted overall U.S. cancer death rate declined by 27% from 1991 to 2016, which translates to more than 2.6 million deaths averted. 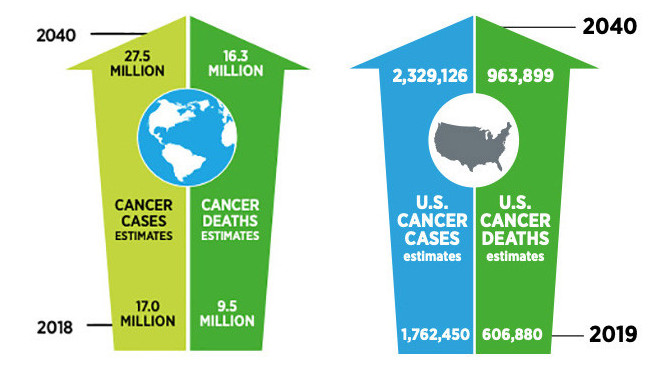 The report reveals several ongoing disparities in cancer incidence and outcomes, but in some areas the gap is narrowing. For example, in 1990, the cancer death rate of African-American men was 47% higher than that of white men, but by 2016, that figure had fallen to 19%.

The number of U.S. adults and children with a history of cancer reached 16.9 million at the beginning of January 2019, up from 3 million in 1971, according to the report. And the number of survivors—including both people cured of cancer and those currently living with the disease—is expected to continue to rise, reaching a projected 22.1 million by 2030. Unfortunately, though, survivors often have poorer health and quality of life than people of a similar age who have not had cancer.

“The rapidly expanding population of cancer survivors, which encompasses all living people who have ever been diagnosed with cancer, is a testament to the significant progress we are making against the disease,” the report states. “However, this situation poses new challenges for all stakeholders committed to reducing the morbidity and mortality of cancer in the United States and around the world.”

Lifestyle and behavior changes have contributed to the drop in cancer incidence, most notably a dramatic decline in cigarette smoking, from 42% of the U.S. adult population in 1965 to 14% in 2017. In addition to lung cancer, tobacco use causes several other types, including mouth and throat, stomach, kidney, bladder, colon, liver and cervical cancers.

The effects of electronic cigarette use, or vaping, are less well known. “There is an urgent need for additional research to evaluate long-term health risks, including cancer, cardiovascular and pulmonary diseases and pregnancy outcome,” the report notes. 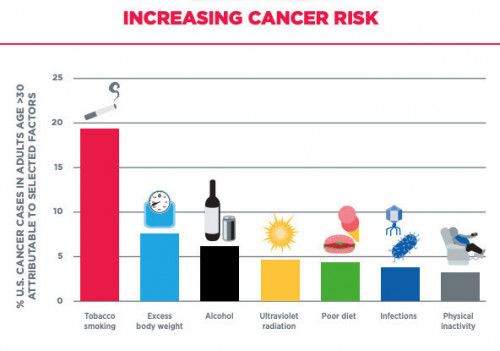 But as smoking has gone down, rates of obesity have gone up, reaching 38% among men and 41% among women in 2016. Like smoking, overweight and obesity are linked to numerous types of cancer.

The good news is that people can take steps to reduce their cancer risk. In fact, about 40% of cancer cases and half of cancer-related deaths are associated with preventable risk factors, including nearly 20% attributable to excess body weight, alcohol use, poor diet and physical inactivity, according to the report.

These steps include smoking cessation, limiting alcohol consumption, maintaining a healthy weight, being physically active, eating a diet high in fruits and vegetables with less red or processed meat and added sugar, and limiting ultraviolet (UV) light exposure from the sun or tanning beds. Getting vaccines to protect against human papillomavirus (HPV) and hepatitis B as well as treatment for hepatitis C helps prevent cancers caused by these viruses. The report also discusses recommendations for screening to detect cancer at an earlier stage, when it may be easier to treat. 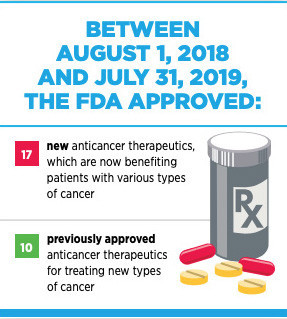 The Food and Drug Administration (FDA) granted 27 new approvals for cancer treatment between August 2018 and July 2019—the most ever in a single year—including 17 new therapies and 10 new indications for existing drugs. These include Vitrakvi (larotrectinib), the first targeted therapy designed to treat cancer anywhere in the body with a specific genetic mutation, and Tecentriq (atezolizumab) as the first immunotherapy for breast cancer.

“The rapid pace and broad scope of the progress we are making against cancer are extraordinary, and we are now poised to deliver the next wave of lifesaving breakthroughs,” AACR CEO Margaret Foti, PhD, MD, said in a press release. “If we are to seize these opportunities to make unprecedented advances for patients, it is vital that we ensure that medical research remains a high priority for our nation’s policy makers.”