Sunday, September 18, is all about #HIVandAging. Here are seven common reasons older adults could be living with HIV without knowing it.

Sunday, September 18, marks National HIV/AIDS and Aging Awareness Day 2022 (searchable on social media as #HIVandAging or #NHAAD). Launched in 2008 by The AIDS Institute, the day shines a light on the growing number of people aging with HIV as well as those diagnosed with the virus later in life.

People 50 and older represent the fastest-growing population of people with HIV, which should come as no surprise considering that people diagnosed with HIV at younger ages and who take regular treatment now live fuller and longer lives—thriving well beyond their 50s.

In 2018, for example, 47% of people living with HIV were 50 or older. This age group accounted for 17% of new diagnoses that year, according to the Centers for Disease Control and Prevention on NHAAD.org.

Interpreting the data in a slightly different way, AIDSVu.org, which creates interactive maps and charts based on HIV data, states that:

• 67% were virally suppressed—the highest viral suppression rate out of all age groups.

In addition, PrEP [pre-exposure prophylaxis] use increased by 38% from 2018 to 2019 among people in this age group, indicating more engagement in HIV prevention among older adults.

Older adults living with HIV face additional aging-related challenges such as multiple chronic conditions like cardiovascular disease, lung disease, obesity, and more. Stigma stemming from isolation due to a lack of social support and/or illness may also prevent older individuals from accessing HIV-related health care or disclosing their HIV status. 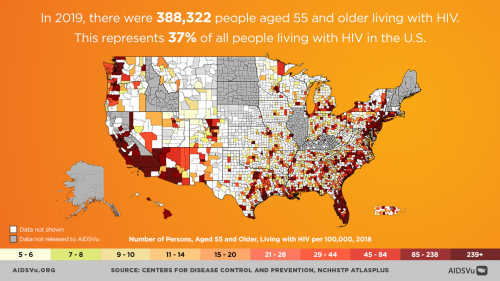 Similarly, NHAAD.org notes, “When someone is diagnosed with HIV, they often find themselves battling depression. Older adults living with HIV/AIDS need support and understanding from their health care providers, family and friends. When HIV is compounded with other diseases common to aging, like cardiac disease, osteoporosis, diabetes and frailty, the issue of depression becomes significant and must be addressed. Depressed individuals are unlikely to adhere to medical treatment or succeed in making necessary lifestyle adjustments, placing them at high risk for poor health outcomes.”

Another unique concern regarding HIV and older people is that many of them are living with undiagnosed HIV. According to NHAAD.org, this may be due to the following reasons:

Several organizations and government groups use the awareness day to encourage older people to get tested for HIV and, if positive, to get linked to care. A method of testing that has become more popular since the start of the COVID-19 pandemic is self-testing.

Older people in the United States are more likely to be diagnosed with late-stage HIV. Early diagnosis and care are key strategies for ending HIV. Learn about HIV testing, including self-testing: https://t.co/JA13IDDrWT. #NHAAD #HIVandAging #StopHIVTogether pic.twitter.com/XJspN2NP67

In related news, The Reunion Project, a national network of long-term HIV and AIDS survivors, recently named Jeff Berry as its first executive director. You can watch an interview with Berry and blogger Mark S. King in which they discuss the unique challenges these long-term survivors face.

Earlier this year, The Reunion Project launched The Long-Term Survivor Toolkit Webinar Series to explore the issues important to people aging with HIV. The webinars are posted on ReunionProject.net, where anyone can watch them anytime.

Of note, the term “long-term survivors” is not necessarily synonymous with people older than 50, though there is much overlap. The Reunion Project offers an expansive definition of a long-term survivor, which includes folks who have been living with HIV longer than 10 years (such as a 30-year-old who was diagnosed at age 20) as well as those who were HIV positive before effective treatment became available in 1996. 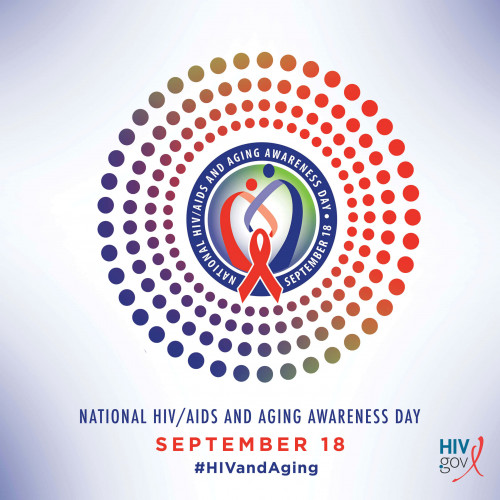 Finally, to learn more, visit the POZ Basics on HIV and Aging. And for details about other HIV awareness days, including a calendar you can download and print, visit “2022 HIV/AIDS Awareness Days.”