About 45 percent of Americans diagnosed with HIV are 50 or older.

Tuesday, September 18, marks National HIV/AIDS and Aging Awareness Day (NHAAD) 2018. Launched a decade ago by The AIDS Institute, the campaign is a chance to raise awareness and highlight the numerous HIV-related issues facing people 50 years old and over. 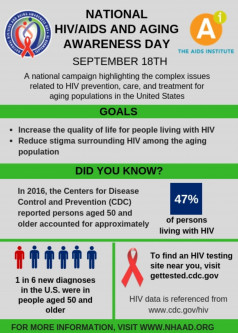 Downloadable graphic for NHAAD 2018Courtesy of The AIDS Institute

And below are some statistics from the Centers for Disease Control and Prevention:

Another way that older people are affected by HIV is reflected in the current POZ cover story, “Grand Parents: Raising the children of parents lost to AIDS.” 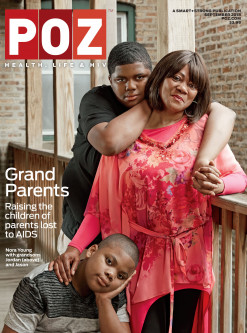 Visit NHAAD.org for graphics you can download and share. You’ll also find resources and ways you can connect and learn more about HIV and aging.

And be sure to take this month’s POZ survey “Getting Older” about aging with HIV. 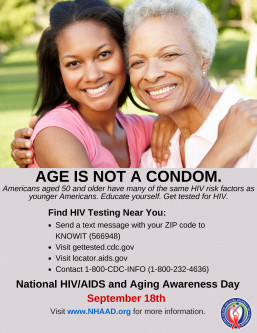 Downloadable graphic for NHAAD 2018Courtesy of The AIDS Institute