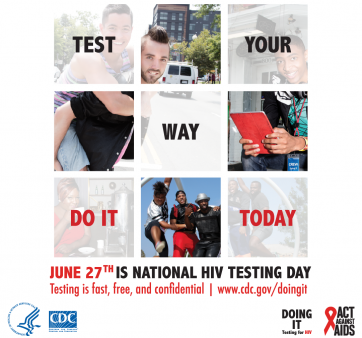 You can download CDC images to promote #NHTD Courtesy of CDC

Tuesday, June 27, is a reminder to get tested for HIV. Here’s why it’s important to do so.

Tuesday, June 27, marks National HIV Testing Day (NHTD) 2017. This year’s theme, according to the Centers for Disease Control and Prevention (CDC), is “Test Your Way. Do It Today.”

The CDC reports that about 1.1 million people are living with HIV in the United States. The good news is that the overall number of annual new HIV infections dropped 18 percent between 2008 and 2014—from 45,700 to 37,600. However, gay and bisexual men did not see an overall decline in infections. Their annual rate remained the same, at about 26,000 per year.

So why is getting tested so important? Because more than 90 percent of new infections are transmitted by people who don’t know they are HIV positive. What’s more, over half of people ages 13 to 24 who are living with the virus don’t know they have it.

Knowing you’re HIV positive is the first step to getting care and treatment. When people living with HIV take daily meds and maintain an undetectable viral load, it not only improves their own health and increases their longevity, but it also makes it virtually impossible for them to sexually transmit the virus. This phenomenon is known as treatment as prevention, or TasP.

The CDC offers a wide variety of HIV testing resources, including social media banners for #NHTD and its #DoingIt campaign here.