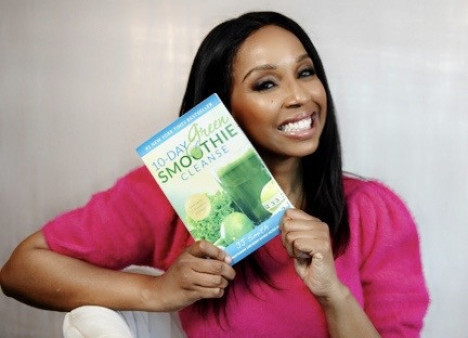 JJ Smith, the author of the No.1 New York Times best seller The 10-Day Green Smoothie Cleanse, swears by these blended beverages.

JJ Smith, a nutritionist and certified weight loss expert, developed her green smoothie regimen in order to see whether this nutritional plan would help her feel better. She’d been feeling sick, weak and fatigued, and no one could get to the root cause of her problem, so she finally decided to include raw greens in her diet. The easiest way to do this, Smith concluded, was to create green smoothies made of different blends of fruits and vegetables that she drank for 10 days.

The experience made her a believer in the power of green smoothies and helped launch a way of eating embraced by many people. Here, she shares her knowledge and experience about how others can use these drinks to introduce veggies into their diets. Devotees swear that the delicious beverages some use as meal replacements or supplements have helped them lose weight and enjoy much better health.

In terms of texture and taste, what food combinations have you found work best when blending green smoothies?

Spinach is going to be the No.1 green, particularly if you’re new to green smoothies, because it has the mildest taste compared to, let’s say, kale. If you try kale in a green smoothie for the first time, you may never drink a green smoothie again because this green has a very powerful taste. Basically, people say they don’t like kale in a smoothie because you taste the green in a very strong way, so make spinach your go-to green. Then you’re going to want to include a pineapple or a mango because they are the most naturally sweet fruits. All you need are a few because you don’t want too much sweets. Don’t forget that these fruits are still natural sugar. But if you just put in a little bit of mango or pineapple, you’re going to get a lot of sweetness. I also like to add berries—blueberries, raspberries, strawberries—because they’re high in antioxidants, which is great for antiaging, and they’re lower in sugar. Basically, if you add spinach, pineapples, mango and then any berries, that’s going to make for a delicious smoothie that gives you the best health benefits as well.

Some people complain about bloating when they drink smoothies because of all the air that’s created when you’re blending the ingredients. Do you have some tips to minimize or eliminate this problem?

When we teach people how to enjoy green smoothies, we always tell them that to avoid bloating you have to “chew” the green smoothie as if it was solid food. To do this, just swirl it around in your mouth. Don’t drink it through a straw like it’s a liquid because that’s when you swallow more air and feel really full and bloated. Chew the smoothie as if it was a solid food to minimize the bloating.

In some cases, people get more greens in one smoothie than they get in an entire week, and their bodies are not used to digesting raw greens. That’s when some people may actually have to add in some digestive enzymes or something to literally break down the greens.

How can you use green smoothies to get children to eat more fruits and veggies?

I get a lot of people writing to me who say even kids love their green smoothies. That’s so exciting to me because if you could introduce foods that kids like when they’re young, it’ll become a habit for them. What we have learned is that if kids actually participate in making the green smoothie, this is good because it’s like a class to them. Often, they’re proud of the green smoothie they create and like how it tastes.

The other thing is, if you start giving children green smoothies as a treat, in their mind they’re going to think of the drink as a dessert, almost like ice cream.

With kids, you have to go very simple, so it’s not a bad idea if you first introduce very little greens, but you include more fruit because then the drink becomes more like a fruit smoothie to them. For children, a fruit smoothie is a much nicer transition to a green smoothie.

What fruit and veggie combinations get the best response from kids?

Kids generally like what I call the tropical smoothie. It’s made from spinach, peaches, bananas and water. That’s a very popular one with kids. This combination makes you feel like you’re on a tropical island somewhere; it just has a very fruity taste. It’s like a cocktail that adults have on vacation. (The only thing that’s missing is liquor.)

Another green smoothie kids like is a mix of spinach, pineapples, mixed berries and mangoes. That’s because you’re getting a lot of the pineapple-mango sweetness. With children, when something tastes like ice cream, they’re going to go all in on that not knowing that it’s something healthy for them. Then they become more open to trying those foods.

In your experience, generally, what are some of the biggest challenges for people to overcome when they begin consuming more fruits and veggies in the form of green smoothies?

Boredom will set in very quickly because you lose a lot of variety. Even though smoothies may taste slightly different and you could have different recipes every day, with green smoothies there’s only so many varieties before you realize, “Hey, I’m drinking another green smoothie.”

The other challenge I think that people have to overcome is cravings. For those first three or four days of green smoothies, your body is going to be in revolt. You’re going to crave everything you’re used to eating, and those cravings are going to be intense. But if you can get through the first three or four days, then your body is going to get more accustomed to green smoothies over time.

Unfortunately, there’s not a lot you can do for intense cravings; your body is going to want what it’s used to having. I always tell people to embrace the cravings because it’s a time of discipline and a time to really focus because you know on the other side of this, just living a healthy lifestyle won’t be as hard because your body will naturally start to crave healthier foods.

What tips can you share about the best equipment to make green smoothies?

Get a blender that’s 1,000 watts or more powerful because you want the smoothie to be really creamy. You don’t want to see little bits and pieces of the greens because visually that isn’t very appetizing. The smoothie needs to look good before you even begin to taste it.

I use frozen fruits, mainly because they stay fresher longer. For example, if you buy a bunch of bananas and don’t use them quickly enough, you may end up having to throw them out because they’ll turn black.

Another reason I prefer using frozen produce is because you don’t need to add ice. If you use fresh produce, you have to add ice, and this could make the smoothie watery instead of creamy. But either frozen or fresh fruits and veggies are very nutritious.

I think for many people including green smoothies in their diet is an easy transition. Adding them to your eating regimen is a great way to get healthy and lose or maintain weight—with the least effort—and a good way to become energized.

I would encourage everyone to try green smoothies to see how these beverages affect their health. I’m very sure that many people will probably stick with them for life.