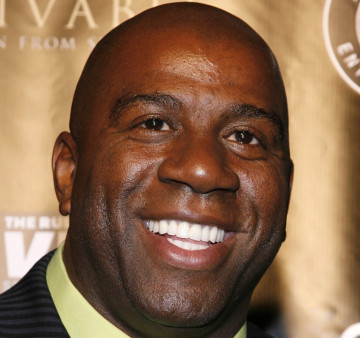 Donald Sterling, the owner of the Los Angeles Clippers professional basketball team who was caught on tape making racist comments, believes retired player Earvin “Magic” Johnson is not a “good example” for children. The 80-year-old son of Jewish immigrants made those comments on CNN in response to a question by Anderson Cooper asking if Sterling had apologized to Johnson.

In a conversation recorded by a female friend, Sterling is heard criticizing her for posting photos online of her with African Americans, including Johnson: “Admire him, bring him here, feed him, fuck him, but don’t put [Magic] on an Instagram for the world to have to see so they have to call me. And don’t bring him to my games.” Soon after the audio was released, Johnson and others called for Sterling to be forced to sell the team.

The Huffington Post notes that Sterling told Cooper he had “made a terrible mistake” with those remarks, but then criticized Johnson: “Magic Johnson, what has he done? He’s got AIDS.” Cooper then clarified that Johnson has HIV, not AIDS. Sterling responds, “What kind of a guy has sex with every girl, then he catches HIV? Is that someone we want to respect and tell our kids about? I think he should be ashamed of himself. I think he should go into the background. What does he do for the black people?”

Sterling told Cooper he has since spoken twice with Johnson. When Cooper asked if he apologized to Johnson, Sterling said: “If I said anything wrong, I’m sorry. He’s a good person. I mean, what am I going to say? Has he done everything he can do to help minorities? I don’t think so. But I’ll say it, he’s great. But I don’t think he’s a good example for the children of Los Angeles. That he would go and do what he did, and then get AIDS.”

Adam Silver, the commissioner of the National Basketball Association (NBA), has responded to the widespread criticism of Sterling by banning him for life from the NBA, fining him $2.5 million and calling on the other NBA team owners to force him to sell the team. The owners have not yet made a decision. It would take 75 percent of them to force a sale. In response to the remarks by Sterling to CNN, Silver issued an apology to Johnson on behalf of the NBA.

On Twitter, Magic Johnson has expressed his desire to move on after this latest round of comments by Sterling:

After publicly disclosing his HIV-positive diagnosis in 1991, Johnson retired from the Los Angeles Lakers after 13 seasons. He won a gold medal in 1992 as part of the U.S. Olympic basketball team (a.k.a. “The Dream Team”). A member of the Basketball Hall of Fame, Johnson has had success as an HIV/AIDS advocate, an entrepreneur and a philanthropist. He and his wife Cookie have publicly supported their gay son E.J.

Magic Johnson was on the cover of the June/July 1996 issue of POZ. Click here to read the cover story.