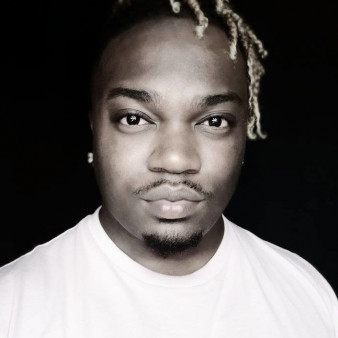 This Arkansas man’s HIV was undetectable during a consensual hookup, so why is he facing 30 years in prison?

A consensual one-night stand between two adult men in October 2015 is the basis for an HIV criminalization case that’s garnering national attention and fueling fundraising efforts as it goes before an Arkansas jury October 4. One of the men, Sanjay Johnson, faces up to 30 years in prison for allegedly not disclosing his HIV status before the hook-up, despite medical records showing his viral load was undetectable within a week of the encounter.

A handful of states have updated their HIV-related laws to reflect current science about HIV transmission, such as the concept of “Undetectable = Untransmittable” (“U=U”), which states that a person with HIV who maintains an undetectable viral load cannot transmit the virus.

Arkansas is not one of those enlightened states. In fact, this summer, attorneys for Johnson challenged the Arkansas disclosure law, stating it was based on outdated fears. But as the Arkansas Democrat Gazette reports, a judge ignored the science and ruled that because there is still a danger of transmission, the HIV disclosure rules remain lawful. 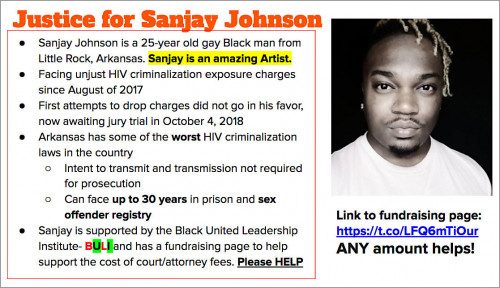 A “Justice for Sanjay Johnson” slide from the 2018 U.S. Conference on AIDSCourtesy of BULI

But let’s back up. How did we go from a 2015 sexual encounter on hookup app Jack’d to a 2018 criminalization lawsuit? HIV website TheBody.com interviewed both men in the case (the other man is Jamal Doe, a pseudonym) and offers an excellent summary in “After Hook-Up and Friendship, Arkansas Men Pitted Against Each Other in HIV Criminalization Trial.”

After their one-night stand, Johnson and Doe ended up becoming friends and Johnson soon confided that he in fact was HIV positive but that Doe had nothing to worry about because even though they hadn’t used condoms, Johnson was undetectable at the time.

About a month after their hookup, TheBody.com reports, Doe, who had returned to school, became very ill and learned he had HIV. “My CD4 was so low that they actually considered me to have AIDS until my viral load went down and my CD4 went up,” Doe told TheBody. He became depressed, quit school and believed he was about to die. Once he got on treatment, his condition improved.

Doe said that he went to the police to file a complaint against Johnson because he didn’t want Johnson to do this to other people. Doe pointed out that the case against Johnson is brought by the state, not by him.

A group called the Black United Leadership Institute (BULI) has been raising money for Johnson’s legal defense. BULI has also been raising awareness via slides and flyers, like the one pictured above; many appeared at last week’s United States Conference on AIDS (USCA).

You can donate and read more about the case on FundedJustice.com. The goal is to raise $5,000 before October 1. As of September 10, BULI raised $2,320. On that page, Johnson introduces himself:

My name is Sanjay Johnson and I currently live in Little Rock, Arkansas. I am a 25-year-old Black Gay man that works two jobs, seeks to use my creative outlets in the arts, and contribute to my community as I can. Unfortunately, in August 2017, my life was interrupted by the biggest challenge and ongoing nightmare that I couldn’t have imagined nor would wish upon anyone else.

As a single young man, I chose to explore the world of meeting other like-minded individuals in an online format which resulted in myself meeting an individual for a consensual encounter. After months of no contact with this person, I was confronted at my front door by police with a complaint citing myself as “knowing and willfully exposing another to HIV.” I was immediately arrested and spent over a week in jail hoping that someone cared enough and would come to my rescue.…

Ultimately I must now prepare for a jury trial date, rescheduled for October 4, 2018*, with me facing a jury who will decide my fate based on their understanding or lack of knowledge about HIV or how far we’ve advanced in this health dilemma.