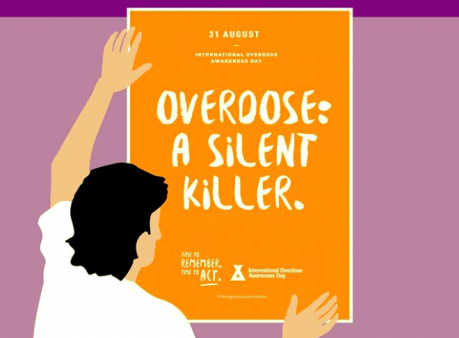 Tuesday, August 31, is International Overdose Awareness Day (IOAD) 2021. The annual global event is “the world’s largest annual campaign to end overdose, remember without stigma those who have died and acknowledge the grief of the family and friends left behind,” according to the campaign’s website OverdoseDay.com.

From January 2020 to January 2021, overdose deaths in the United States increased by 30.9%, according to new data from the Centers for Disease Control and Prevention (CDC), for a total of 94,134 reported overdose deaths. Once more complete data are in, that number is expected to reach 95,230. This compares with 48,126 overdose deaths for the year ending January 2015.

What’s more, injection drug use is linked with higher rates of the liver infections hepatitis B and C as well as HIV. All three viruses can be spread through shared needles.

The CDC report on overdose deaths also includes data on individual states and overarching trends and graphs, like the ones below.

Overdose deaths in the United States, for years ending January 2015 to January 2021.Courtesy of CDC.gov

President Joe Biden proclaimed Sunday, August 29, to Saturday, September 4, as Overdose Awareness Week. The White House proclamation notes that the increase in deaths is fueled in part by the opioid epidemic—especially the introduction of synthetic opioids—and the COVID-19 pandemic, which has made it harder for people who inject drugs to access prevention, harm reduction and treatment services.

“The overdose epidemic has taken a toll on far too many Americans and their loved ones,” writes Biden in the proclamation. “Addiction is a disease that touches families in every community, including my own. The epidemic is national, but the impact is personal. It is personal to the millions who confront substance use disorder every day, and to the families who have lost loved ones to an overdose.”

Community groups, governments, organizations and individuals across the nation and throughout the world mark the awareness day with remembrances of lost loved ones, awareness campaigns, advocacy efforts and more.

For example, Tennessee Governor Bill Lee, a Democrat, recorded a short video marking IOAD 2021 (you can watch it above). “It’s no secret that drug overdose deaths continue to affect men and women across this state,” Lee said. “Last year, we lost more than 3,000 Tennesseans to overdose. That’s a staggering and a tragic number, but drug overdose is preventable and, in many cases, reversible. We have so many passionate groups and people in Tennessee working to change and save lives every day.”

Yet as the opioid epidemic and injection drug use continue to take more lives, many communities and politicians are electing to shutter or hamper local syringe exchange services, which can help connect people to prevention, harm reduction and treatment as well as help prevent the spread of HIV and hepatitis B and C. To learn more, see the HIV Basics in POZ and the Hepatitis B Basics and Hepatitis C Basics in HepMag.com as well as the AIDS United blog post “We Can’t Beat Viral Hepatitis, HIV and Overdoses If We Close Syringe Services.”

In New York state, advocates led by Housing Works, which fights the twin epidemics of HIV and homelessness, recently penned a letter to the state’s new governor, Kathy Hochul, urging her to authorize overdose prevention centers. Timed to coincide with International Overdose Awareness Day, the letter reads in part:

Housing Works and the undersigned organizations’ harm reduction services and advocacy follows the National Harm Reduction Coalition’s principles, where harm reduction understands drug use as a complex, multi-faceted continuum of behaviors. It recognizes that the realities of poverty, racism, classism, trauma, isolation and other inequalities affect individuals’ vulnerability to and capacity for effectively dealing with drug-related harms. We also believe in providing nonjudgmental, non-coercive services and resources to New Yorkers who use drugs and work to minimize harm and prevent overdose.

A proposed pilot project would authorize five existing community-based Syringe Exchange Programs (four in New York City and one in Ithaca) to expand their services to include supervised consumption services (also known as Overdose Prevention Centers). OPCs are safe, clean spaces where individuals can safely inject or otherwise use their pre-obtained drugs with sterile equipment while also gaining access, onsite or by referral, to routine health, mental health, drug treatment and other social services. This pilot would be regulated and supervised by the NYS Department of Health’s AIDS Institute with rigorous evaluation by NYU researchers.

As Governor, you have the authority to direct the Commissioner of Health to authorize this pilot program, without any action by the legislature.… In your first days in office and ahead of August 31st’s International Overdose Awareness Day, please authorize this pilot program and help us launch the Overdose Prevention Center pilot sites in New York. Help New York State move past the stigma and fear of those in power and provide real, life-saving services to the people we care for who use drugs and deserve to live a full and healthy life.