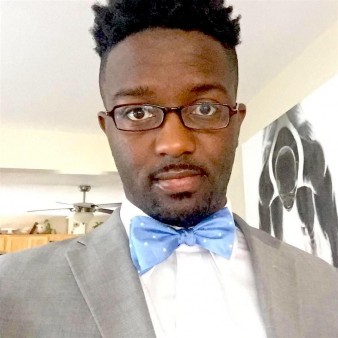 Whether you’re supporting Trump, going “with her” or nursing a third-degree Bern, you’ll want to tune into the Democratic National Convention on Wednesday, July 27, to hear openly HIV-positive speaker Daniel Driffin.

As Los Angeles LGBT newspaper The Pride reports, Driffin will be the first speaker who is open about his or her HIV to address the political convention in 16 years. Driffin will speak at 4 p.m. EST, 1 p.m. PST.

“He’s a 30 year old gay black man living with HIV, and a great public speaker,” is how Jaron Benjamin of New York’s Housing Works describes Driffin to The Pride. “He will enter Morehouse School of Medicine’s MPHA program in the fall and has served as a Georgia Equality Youth HIV Policy Advisor. He was recently part of a PBS segment on the HIV epidemic in Atlanta. He’s also a founder of Undetectables Atlanta, a group of over 400 gay/bisexual men with HIV, and is also a founder of THRIVENESS, a nonprofit service organization serving the same population. He also serves as co-chair of the Task Force to End AIDS in Fulton County, Georgia.”

Driffin is also a POZ 100 honoree who made the list in 2013, when he was the project manager of the Center for Health, Intervention and Prevention in Atlanta. In 2015, he was named a youth policy adviser at Georgia Equality.

Driffin’s selection as a speaker at the DNC comes after AIDS activists met with both Hillary Clinton and Bernie Sanders in May. This was after Clinton had angered the HIV community when she misspoke during Nancy Reagan’s funeral, praising the former first lady’s “low-key advocacy” and telling journalists that the Reagans helped start a national conversation about AIDS. Clinton soon apologized.