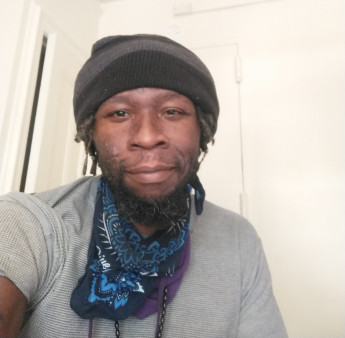 Jason Skinner got tested for hepatitis C and then got into care and treatment. Those two simple decisions changed his life.

Jason Skinner remembers precisely when he learned he had hepatitis C. “I was in lockdown in jail,” he says.

On paper, the 43-year-old father of four claims skills in remodeling, construction, painting and electrical work. “I’m a jack-of-all-trades,” he says with a laugh. But he also likes to engage in outreach on the streets during his personal time when he’s not working as a volunteer at the Brooklyn-based chapter of VOCAL-NY. The community organization serves people in New York state who have experienced incarceration, homelessness and related situations.

Drug use is responsible for his exposure to the hep C virus, Skinner states with candor. Sharing needles and other injection equipment is one of the most common transmission routes.

Following a car accident, Skinner got hooked on prescription opiate pain pills. In late 2012, he moved to New York City, where he replaced the pills with heroin and started injecting the narcotic. “I wasn’t sharing needles,” he says. “It just so happens that someone I was shooting drugs with had hep C, and I used the same piece of cotton as him and ended up getting hep C from that.”

Skinner shot heroin intravenously for about six years. But he quit the drug cold turkey during a stint in jail. He was diagnosed with hep C and offered treatment. He accepted but then reconsidered. “By the time they were going to get started, I knew I wasn’t going to be in jail, so it wasn’t worth it for me to get treatment,” he says.

Like many people who acquire hepatitis C, Skinner didn’t experience any symptoms. Almost half the people who develop hep C don’t know they have the virus, and symptoms can take decades to appear. However, the virus causes inflammation of the liver, which can lead to serious liver problems, including cirrhosis and liver cancer.

“After I learned I had hep C, nothing really changed  for me,” Skinner says. “I was just more conscious of my body because I knew I had hep C, when I got it and needing to find a way to clear it. That was my goal.”

When Skinner was released, he faced a more immediate problem: homelessness. “I’d lost my place because of going to jail,” he says. “At that point, I made a choice. I knew I was failing and had to try to do something to benefit myself and have a better life.”

After eight months on the streets, Skinner received assistance from an organization that found him a place to live. Next, he enrolled in a drug program to wean himself off heroin. “I started taking methadone,” he says.

Then a friend told him about VOCAL-NY in Brooklyn. At first, traveling from Manhattan to the neighboring borough across the East River seemed like a chore.

“I could have probably stayed somewhere in Manhattan and get help,” Skinner says. “But because this person was someone I trusted, I decided to go this route.”

Founded as the New York City AIDS Housing Network in 1999, the organization changed its name to VOCAL-NY in 2010 and expanded its focus to include people experiencing homelessness and those previously incarcerated. Among other services, VOCAL-NY also offers individuals free hep C testing and linkage to care.

Once Skinner arrived there, he didn’t regret his decision. “It was a wonderful experience,” he says. “They treated me nice and let me know everything up front, how things were going to happen and what I had to do. I was very pleased.”

Doctors put Skinner on prescription medicine to cure his hep C. Two weeks into the two-month regimen, he was doing well. “I really didn’t feel no side effects,” Skinner says. “I’m not tired. I don’t get headaches or anything like that, so I feel pretty good.”

Now he’s also a bit more health conscious. “I like my salads, and I don’t eat meat all the time,” he says. “But if you put a crispy chicken salad or a nice, big, juicy T-bone steak in front of me, I’ll tear them up!”

Skinner no longer drinks. “I stopped nine years ago,” he says. (Before he arrived in New York from Florida, Skinner drank heavily. Heavy alcohol use contributes to liver damage.)

He still smokes, though not as much. “I like to smoke a cigarette every now and again, maybe after I eat,” he says. “But I try to cut that down also.”

Physical activity and Skinner don’t quite mix. “I’m not going to lie; I don’t really do exercise,” he says. “My friend tries to get me on the court to play ball, but I keep telling him, ‘I can’t be running up and down the ball court like that!’ He’s still saying, ‘Come on Jay, you can do it!’ But if anything, that would be the kind of exercise that I might get.”

Skinner grew up with this friend and considers him his strongest support system. Although his mother and siblings live in states a few hours away and he has cousins in Manhattan, Skinner views himself as essentially alone. “I’m like the black sheep of the family,” he says.

“My friend has been there for me when I was down and on the streets,” he adds. “He’s been there to lift my spirits when I needed somebody to talk to because I was depressed. Nobody else was there for me.”

Skinner views VOCAL-NY as a second home. He’s found a purpose there and likes to help out by talking to other people who, like him, don’t feel they have family support or a connection to people who truly care enough to listen.

“I feel like I’m here to help people do better than what I did with my life,” he says. “I try to show them that they can go down a different road and that there’s a light at the end of the tunnel regardless of what they’re going through.

“When I’m on the street, I try to encourage people who have hep C to do something for themselves instead of just sitting there,” he continues. “I tell them that nobody is going to help you because you’re not seeking out help for yourself. You’ve got to want it to get it. It’s as simple as that!”