A screengrab from the PEPTALK website Courtesy of PEPTALK.NYC

You’ve Heard That PrEP Can Prevent HIV, but So Can PEP

A new campaign and program aim to boost awareness of and access to post-exposure prophylaxis.

What is PEP, or post-exposure prophylaxis? According to ads on bus shelters in the Bronx, “It’s like Plan B but for HIV.”

The ads are part of a campaign titled “PEPTALK” that’s geared to raising awareness of and increasing access to the HIV prevention tool PEP, especially among minority populations, such as gay men of color. 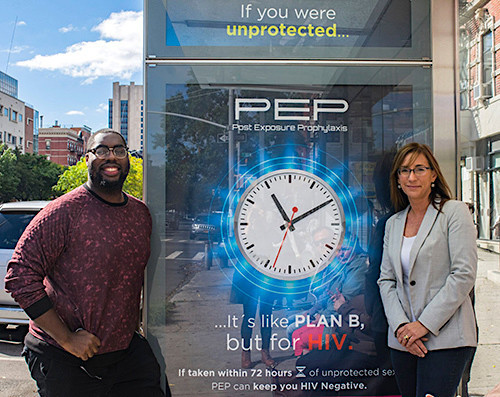 From left: Jeremy Fagan and Victoria Frye in front of a PEPTALK adCourtesy of The City College of New York

The PEPTALK program links people in the New York City area to PEP in order to keep them HIV negative.

The website explains how PEP works (basically, by stopping the virus from multiplying and establishing a long-lasting infection), when to start it (as soon as possible after an exposure and no later than 72 hours afterward), how long to take it (28 days) and how to obtain it without insurance (in New York City, various programs can help individuals access PEP regardless of ability to pay).

“This kind of ad campaign is needed,” said Victoria Frye, DrPH, the study’s principal investigator, in a CCNY press release on the campaign. “Most community residents, even younger people—students in my classes—don’t know about PEP.”

What’s more, the regimen works. “PEP is effective and has been used for decades by medical professionals to prevent infections after needlesticks,” Frye said. “Now, it is one more tool we can use to prevent HIV.”

The campaign appears in Upper Manhattan and the Bronx.