The White House and CDC will offer vaccines to more people at risk, particularly gay and bisexual men.

On June 28, the White House and the Department of Health and Human Service (HHS) announced an enhanced strategy to vaccinate at-risk people—in particular gay and bisexual men—against monkeypox. The Centers for Disease Control and Prevention (CDC) has activated its Emergency Operations Center to facilitate the nation’s monkeypox response. HHS will distribute 56,000 doses of the Jynneos vaccine immediately, and around 1.6 million doses are expected to be available this year.

.@POTUS has led a comprehensive strategy to respond to the monkeypox outbreak and protect those at highest risk since the first U.S. case.

“Now we have a comprehensive monkeypox response plan that’s focused on a few key pillars,” White House COVID-19 response coordinator Ashish Jha, MD, MPH, told reporters. These include scaling up and decentralizing testing, scaling up and delivering vaccines, supporting health care providers and “deep engagement with communities that are most affected,” including the LGBT community.

The monkeypox outbreak outside endemic countries was first reported in the United Kingdom in early May. As of June 29, the CDC has identified 351 cases in 27 states and Washington, DC. Worldwide, there are now more than 5,000 cases.

While anyone can get monkeypox through close personal contact, the virus is primarily spreading in the United States and other non-endemic countries within networks of gay and bisexual men who have multiple sex partners or attend venues and gatherings where sex and other intimate contact takes place. Only a small number of cases have been identified among women and children. Gay and bi men are more connected to sexual health services and more likely to get symptoms checked out, but this “ascertainment bias” is unlikely to fully explain the disparity, according to National Institutes of Allergy and Infectious Diseases director Anthony Fauci, MD.

The monkeypox virus can be transmitted via skin-to-skin contact, kissing and contact with contaminated clothing, bed linens or surfaces. It also can be transmitted through respiratory droplets at close range, but it doesn’t spread through the air over longer distances, like the coronavirus that causes COVID-19. It is not yet known whether monkeypox is directly sexually transmitted through semen or vaginal fluid, but it does spread via contact with sores during sex.

However, pregnant people, children and immunocompromised people—including those with poorly controlled HIV—are at greater risk for severe illness.

Smallpox vaccination can prevent monkeypox as well. A safe nonreplicating smallpox and monkeypox vaccine (brand names Jynneos and Imvanex) was approved in 2019. It is administered as two doses, four weeks apart. An older live virus vaccine (ACAM2000) can cause adverse side effects, especially among immunocompromised people, including people living with HIV. Because monkeypox has a long incubation period, vaccines may be used as post-exposure prophylaxis within two weeks after exposure, but “the sooner you can get vaccinated after exposure, the better,” CDC director Rochelle Walensky, MD, MPH, told reporters.

The White House announced last week that five large commercial labs will start offering monkeypox testing. Previously, only state labs could test for orthopox (the virus family that includes smallpox and monkeypox), with confirmation done centrally at the CDC, which could be a cumbersome and time-consuming process.

“We are dramatically scaling up and decentralizing testing,” Raj Panjabi, MD, of the White House National Security Council, told reporters during a June 29 briefing. “We’re trying to increase testing access and convenience in every community.”

Walensky urged all health care providers to have “a high clinical suspicion for monkeypox,” and said that “patients presenting with a suspicious rash should be tested.”

Around 10,000 doses of Jynneos have already been deployed, according to David Boucher, PhD, HHS’s director infectious disease preparedness and response. HHS has allocated 56,000 more doses of the vaccine to affected communities, and an additional 240,000 doses are “on their way in the next few days,” Panjabi said.

HHS expects more than 750,000 additional doses to be made available over the summer, and 500,000 more doses will complete manufacturing and inspection throughout the fall, adding up to a total of 1.6 million doses by the end of 2022. The HIV advocacy group PrEP4All has urged the administration to try to accelerate this process. States may also request the older ACAM2000 vaccine if they think it’s needed.

HHS is prioritizing vaccine rollout for those at greatest risk for monkeypox. “This vaccine currently has some limitations on supply, and for this reason the administration’s current vaccine strategy prioritizes making it available to those who need it most urgently,” Walensky told reporters. “As soon as we have more vaccines available, we will of course continue to expand from a post-exposure prophylaxis strategy ideally to a pre-exposure prophylaxis strategy.”

This means people who have had close physical contact with a person diagnosed with monkeypox, those who know a sex partner has monkeypox, and gay and bi men who recently had multiple sex partners at a venue where people with the virus were present or in areas where monkeypox is spreading, according to the CDC’s new criteria. The eligibility of transgender men and women and nonbinary people is less well-defined, but those who have multiple sex partners could benefit and should be included.

The expanded supply will enable New York City and Washington, DC, to resume vaccination efforts for at-risk gay and bi men, and will allow other cities with outbreaks—such as Chicago, Miami, Los Angeles and San Francisco—to start. New York City and DC both launched vaccine clinics in recent days, but the limited supply was snapped up immediately.

The exact number of gay and bi men eligible for monkeypox vaccination is unclear, but eligibility for HIV pre-exposure prophylaxis (PrEP) can serve as a proxy. Around 940,000 HIV-negative men are considered eligible for PrEP, and some proportion of the approximately 700,000 gay and bi men living with HIV are also at risk for monkeypox. Taken together, the incoming supply of the Jynneos vaccine will cover this population.

So far, monkeypox is not spreading within other groups. Viruses don’t discriminate based on identity, but some kinds of behavior do facilitate transmission. As science writer Kai Kupferschmidt explains, sex with multiple partners and concurrent partnerships make it easier for pathogens to spread, and anonymous encounters make them harder to trace.

While it is expected that monkeypox will reach beyond the currently affected social and sexual networks—for example, to caregivers, women who have sex with gay or bi men and household members, including children—it seems unlikely to spread rapidly outside these networks. Monkeypox vaccination is not indicated for, or being made available to, the general population at this time. 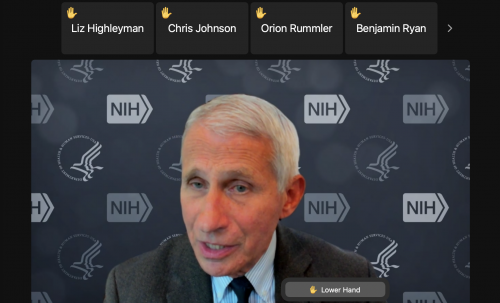 As the enhanced vaccination effort gets underway, health officials are urging anyone with a rash or other possible monkeypox symptoms to seek medical care, get tested and avoid sex and social gatherings until the results are known. People who test positive for monkeypox should isolate for three weeks, and those who think they might have been exposed should self-monitor for symptoms.

“You don’t want to panic people, but you do want to get people—particularly with the Pride activities that are going on now—to be aware and to just be careful,” Fauci told reporters. “Being careful can be very practical, by making sure that you’re aware of things like skin lesions, particularly when you’re having a sexual encounter.”