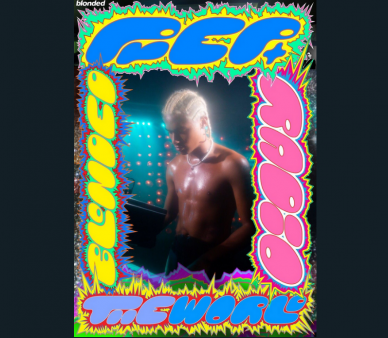 The pop star’s party is named after the HIV prevention drug and is meant as an homage to ’80s-era queer nightlife.

Is pop star Frank Ocean out of sync with HIV advocacy? The gay Black singer says he wanted to raise awareness about the daily HIV prevention pill PrEP, or pre-exposure prophylaxis, so he named his new club night PrEP+ and sold branded $60 T-shirts on his website. Numerous AIDS activists did not like the sound of that and took to social media to voice their disapproval.

So u want the girls to pay $60 for a shirt that says PrEP so u can bring awareness to said PrEP, when you can just donate to agencies that have people trained to bring awareness abt PrEP.. https://t.co/ERNzbR1KjD

“A $60 tee with ‘PrEP’ on it. Sounds familiar to a pharmaceutical company that marks up the price of PrEP to over $2,000/month while it costs $6 to make a month supply. This is not it Frank,” tweeted ACT UP New York. The activist group continued: “Coulda also been thoughtful if all the funds went to service providers, PrEP navigators, and HIV justice and treatment orgs, but who asked us?”

Below is one of the promos for the club night, which debuted October 17 in Queens, New York.

This Thursday night a new party from @blonded called PrEP+ in NYC. PrEP+ is the first in a series of nights; an ongoing safe space made to bring people together and dance. PrEP+ will welcome globally celebrated DJs. The night is named PrEP+ as an homage to what could have been of the 1980s’ NYC club scene if the drug PrEP (pre-exposure prophylaxis) -- which can be taken daily to prevent HIV/AIDs for those who are not infected but are at high risk -- had been invented in that era. Ticket links have been distributed and the venue will be announced to ticket-holders on the evening of the night. Club hours are 10pm-late. House rules: No photos or videos are allowed Consent is mandatory Zero tolerance for racism, homophobia, transphobia, sexism, ableism or any form or discrimination The dance floor is for dancing www.blonded.co

Promotional materials printed in Pitchfork and online described the night as “the first in a series of nights; an ongoing safe space made to bring people together and dance.” The night pays “homage to what could have been of the 1980s NYC club scene if the drug…had been invented in that era.”

On Twitter, @empresstweetszs wasn’t the only one to find that outlook troubling. “What exactly was frank ocean trying to do with a party called ‘prep+’ that imagines the 80s without AIDS as if it was an awky buzzkill rather than a state sanctioned plague? Its so tone deaf…”

This is a weird flex.

It imagines *universal* access to PrEP at an “exclusive” party?

It imagines the club scene in the 80s MADE BY ppl living with HIV as if...if would have been better without them?

And what good is PrEP access to ppl who were homeless, jobless? https://t.co/GmZJK2XB7N

And it shows a lack of imagination for an artist to think of eradicating AIDS with just one (mostly privately controlled and for profit) tool like PrEP. As Zoe Leonard put it so well, pic.twitter.com/h5S5kl3MWW

I respect Frank Ocean so much i’m in awe of his talent and maybe this is just a badly written press release but i was shocked to read this... https://t.co/HKIqmPvxbg pic.twitter.com/daMmuvH7w1

For more roundups on the controversy, check out Buzzfeed News.

Ocean responded to the backlash by posting a statement on his Tumblr. It begins: “Not funded by Gilead Science,” which is a reference to the pharmaceutical company that manufactures Truvada and Descovy, the only to meds approved as PrEP.

Ocean then explained that he chose the name PrEP+ because “while designing the club…I started to imagine in an era where so many lives were lost and so much promise was lost forever along with them, what would it have been like if something, anything had existed that in all probability would’ve saved thousands and thousands of lives.

“I recognize NY wasn’t all lasers and disco lighting and that simultaneously, there was a lot of crime and poverty and that a huge part of club culture, the gay community, at that time were being wiped out by HIV + AIDS. Now in 2019, there’s a pill you can take every day that will at a better than 90% chance prevent you from contracting HIV.”

Using his own circle of friends as an example, Ocean goes on to illustrate that lots of people don’t know about PrEP. He adds that awareness about PrEP “isn’t always what we’d hope it would be. But anyway…I’m happy folks are talking about the subject in the first place.”

To learn more about PrEP, read the POZ Basics on prevention and search the hashtag #PrEP for relevant articles such as “Black and Latino Gay and Bi Men Are Less Likely to Use PrEP,” “PrEP Popularity Linked to Declining HIV in Major U.S. Cities” and “Uninsured Young Black Gay & Bi Men See Delays in Getting PrEP.”