A coalition of LGBT groups sues the Trump administration over the rule. The lawsuit is “Whitman-Walker Clinic v. HHS.”

UPDATE: This article was originally published June 15, 2020. On June 22, a broad coalition of LGBT groups sued the Trump administration over its attempt to erase health care protections for LGBT people. The lawsuit is titled Whitman-Walker Clinic v. HHS. For more, see this Politico.com article and this Lambda Legal press release.

The Trump administration has issued a new health care rule that ends protections against anti-LGBT discrimination. Specifically, it states that anti-discrimination rules do not cover gender identity and sex stereotyping. The media has portrayed this as mostly an attack against transgender people, who are certain to be especially vulnerable, but advocates point out that the rule change could affect the broader LGBT community and people living with HIV.

Big love to everyone who literally took a stand yesterday in Brooklyn to protest violence and discrimination against trans people. #transrightsarehumanrights #translivesmatter pic.twitter.com/YoZnyoG4OY

The rule change was announced on Friday, June 11, the fourth anniversary of the Pulse shootings, a massacre at a gay nightclub in Florida. (June is also LGBT Pride Month.) The administration, reports The New York Times, said the timing was “purely coincidental.” However, the announcement led to protests across the nation in support of the transgender community.

Section 1557 of the Affordable Care Act (ACA, or Obamacare) prohibits discrimination in health care based on race, color, national origin, sex, age or disability. However, the Department of Health and Human Services (HHS) has for at least the past year made the case that the definition of “sex” is open to interpretation. The new rule clarifies that Section 1557 does not include protections against sex stereotyping and gender identity.

#COVID-19 is disproportionately threatening vulnerable communities like #trans, #LGBTQ, #Black, #Latinx, & #Immigrants. We should be doing everything we can to provide treatment to whoever needs it, not escalating fear & confusion. #ProtectTransHealth https://t.co/zVjQzNdWAP pic.twitter.com/d9639jfUZT

As POZ wrote in August 2019, when HHS first proposed the changes, the rule would “allow insurance plans to limit or deny coverage, impose cost sharing, restrict coverage for people with a disability and use discriminatory marketing practices and insurance benefits, according to a press release from I Am Essential, a coalition of patient groups.”

“This rule will give health insurance issuers free rein to discriminate against people living with HIV,” said Michael Ruppal, executive director of The AIDS Institute, in a statement about the finalized rule announced June 12. “We saw this happen in Florida before the original Section 1557 rule was promulgated. Health plans will no doubt seize this opportunity to once again design benefit plans that make it difficult or impossible for people living with or attempting to prevent HIV to get the medicines and care they need.”

However, as LGBT and HIV legal advocacy group Lambda Legal points out, the new rule doesn’t actually change existing law. “The Trump administration has enshrined its discriminatory interpretation into the HHS rule book, but that does not—and cannot—actually change the law,” stated Sasha Buchert, senior attorney and codirector of the group’s Transgender Rights Project, in a Lambda Legal statement. “However, this is enough to cause confusion and hurt our communities, especially transgender people and people of color who already face elevated rates of discrimination in health care settings. This rule change serves no other purpose than to target and discriminate against LGBTQ people. The cruelty is the point.”

At a time when there is so much violence against trans people, it is abhorrent that the Trump admin is stripping away critical health protections.

Reminder: Under NYS law, discrimination based on gender identity or gender expression is ILLEGAL.

As New York Governor Andrew Cuomo tweeted in response to news of the new rule: “Reminder: Under NYS law, discrimination based on gender identity or gender expression is ILLEGAL.”

In addition, the Supreme Court ruled on June 15, three days after the health department announcement, that Title VII of the Civil Right Act of 1964 protects LGBT employees from workplace discrimination. In other words, as CNN reports, the ban on workplace discrimination based on sex does include gender identity and sexual orientation. How this will apply to health care coverage and the HHS rule change is not yet clear.

LGBT advocacy group Human Rights Campaign (HRC) also spoke out against the health care rule, adding that it plans to sue the administration in what will mark HRC’s first case under a litigation initiative it launched last fall.

“LGBTQ people get sick. LGBTQ people need health care. LGBTQ people should not live in fear that they cannot get the care they need simply because of who they are,” noted Alphonso David, HRC president, in a statement. “It is clear that this administration does not believe that LGBTQ people, or other marginalized communities, deserve equality under the law. But we have a reality check for them: we will not let this attack on our basic right to be free from discrimination in health care go unchallenged. We will see them in court and continue to challenge all of our elected officials to rise up against this blatant attempt to erode critical protections people need and sanction discrimination.”

Most advocates pointed out it was a particularly bad time for the Trump administration to release the health care rule. “It’s really, really horrendous to not only gut nondiscrimination protections, but to gut nondiscrimination protections in the middle of a pandemic,” Rodrigo Heng-Lehtinen, the deputy executive director of the National Center for Transgender Equality, told The New York Times. “This rule opens a door for a medical provider to turn someone away for a COVID-19 test just because they happen to be transgender.” 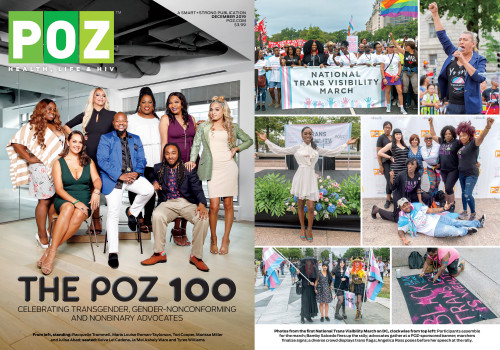 In addition to COVID-19 headlines, Black Lives Matter protests—many of which now center the issues of Black trans lives—continue to roil the nation. This is relevant because transgender people of color, notably Black and Latina trans women, are at higher risk of HIV and discrimination. For more details about that, read the POZ article about National Transgender HIV Testing Day 2020 and check out the 2019 POZ 100, which celebrates transgender, gender-nonconforming and nonbinary advocates.

Cleveland Clinic to Charge for Some Patient-Provider Messaging