Smog in urban areas is hard to avoid. Now, new findings on the health effects of air pollution, recently published in the journal Diabetes, suggest that this invisible, and sometimes visible, mix of solid particles and gases might increase some kids’ risk not only for obesity but also for type 2 diabetes, Health Day reports.

Type 2 diabetes occurs when the body doesn’t produce enough insulin, a hormone that helps regulate the body’s blood sugar levels and other metabolic functions throughout the day. Insulin is produced in the pancreas, a small glandular organ located behind the lower part of the stomach.

For the study, researchers at the University of Southern California’s Diabetes and Obesity Research Institute followed 314 overweight or obese Hispanic children between ages 8 and 15 living in Los Angeles county into adulthood.

By the time each youngster turned 18 years old, researchers found that those who lived in areas with high levels of air pollution had 13 percent less efficient insulin-producing cells, a.k.a. beta cells, in their pancreas when they became adults. (When beta cells stop working as they should, the risk of developing type 2 diabetes and other metabolic issues rises dramatically.)

“Diabetes is occurring in epidemic proportion in the U.S. and the developed world,” said Frank Gilliland, MD, PhD, a professor of preventive medicine at USC and a senior author of the study. “It has been the conventional wisdom that this increase in diabetes is the result of an uptick in obesity due to sedentary lifespans and calorie-dense diets. Our study shows air pollution also contributes to type 2 diabetes risk.”

Although the report found a link between city smog and a risk of type 2 diabetes, researchers also noted that none of the children developed type 2 diabetes during the study period.

What can parents living in cities do to counteract this potential risk? Since it’s nearly impossible to avoid air pollution, the best anyone can do, scientists said, is to reduce exposure to dangerous airborne chemicals in common-sense ways. For instance, instead of going for a walk or run during busy morning and evening commute times, change your schedule to avoid strenuous activity during peak hours, especially near sources of pollutants. 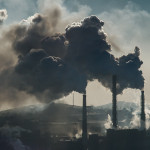