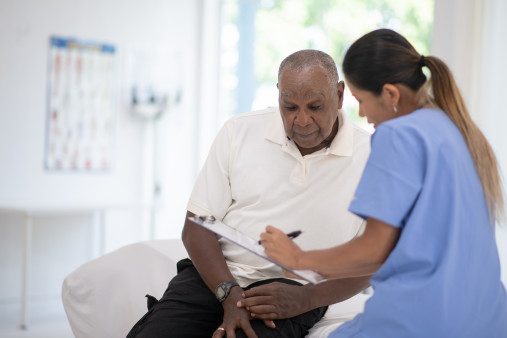 A new study calls for Black patients in need of kidney transplants to be put on waitlists at a higher level of kidney function.

Disparities in regard to kidney transplant access in the United States remain persistent. But new findings published in the Journal of the American Society of Nephrology suggests that waitlist policies play a role in whether Black patients are able to get transplants before their disease progresses to organ failure, according to a recent press release.

African Americans are at a greater risk of a quicker onset of chronic kidney disease (the gradual loss of kidney function). In addition, Black patients are more likely to be referred much later for a transplant evaluation than their white counterparts. This results in Black patients being placed at a severe disadvantage in having enough time to prepare for a transplant.

For the study, researchers measured racial disparities with different equations to determine wait time prior to the onset of kidney failure. Then scientists noted the level of kidney functionality necessary for Black patients to achieve equality with white patients in how long individuals waited for a transplant.

Results showed that if Black patients on a waitlist were registered at a slightly higher level of kidney function compared to whites, this could help to reduce the racial gap in patients’ wait time before kidney failure occurred. What’s more, doing so would also eventually help to increase everyone’s opportunity to get a kidney transplant.

“Regardless of which equation we used to estimate kidney function, Black patients had less potential time available for waitlist registration than white patients,” said Elaine Ku, MD, a nephrologist at the University of California, San Francisco Health, and one of the study’s authors.

“However, we found that use of a higher kidney function threshold to allow for earlier eligibility for waitlisting in Blacks could theoretically reduce the racial disparity in time spent in the advanced stages of chronic kidney disease,” she added.