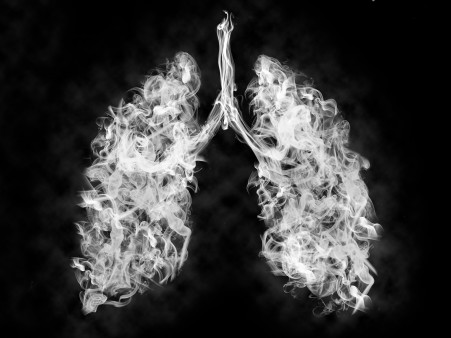 New findings published in the American Journal of Preventive Medicine reveal that e-cigarettes can significantly increase the risk of chronic lung disease, especially among those who vape in addition to smoking cigarettes, reports the University of California San Francisco (UCSF).

For the study, investigators tracked e-cig and tobacco habits as well as new lung disease diagnoses in more than 32,000 American adults from 2013 to 2016. Scientists found a link between e-cig use and lung diseases, including asthma, bronchitis, emphysema and chronic obstructive pulmonary disease. (Previously, researchers were unable to determine whether e-cigarettes caused lung disease or whether people with lung disease were more likely to vape.)

Swapping tobacco for e-cigarettes lowered lung disease risk for smokers, but less than 1% of individuals made that switch. “For most smokers, they simply add e-cigarettes and become dual users, significantly increasing their risk of developing lung disease above just smoking,” said study author Stanton Glantz, PhD, a professor of medicine at the university who is also the director of the UCSF Center for Tobacco Control Research and Education.

These findings are unrelated to the acute lung disease known as e-cigarette or vaping product use–associated lung injury, which was first reported this past summer and continues to affect more than 2,400 individuals across the United States.

However, the inquiry adds to the growing list of e-cigs’ long-term adverse effects, Glantz said.

For related coverage, read “Certain E-Cigs May Aggravate Asthma” and “Vaping Landed 14 Young People in the Hospital in 2 States.”